Doulton Lambeth The Playgoers by George Tinworth – £2400 at Biddle & Webb.

However, he is best remembered as the creator of the series of playful stoneware sculptures of zoomorphic mice and frogs that have become the Lambeth factory’s most commercial fodder

Typically, they were produced from moulds designed by Tinworth, then hand-assembled by his assistants before the maestro adding some final touches. Accordingly, no two models are quite the same.

The Playgoers depicting mice watching a Punch and Judy show first issued c.1886 was one of the most popular creations. 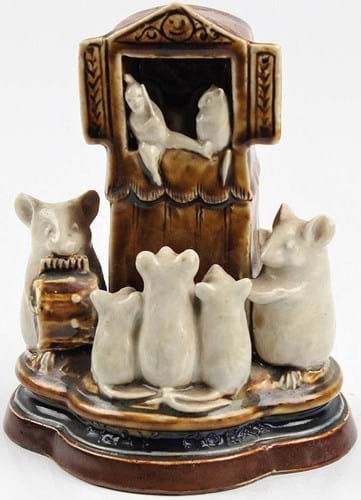 Doulton Lambeth The Playgoers by George Tinworth – £2200 at Biddle & Webb.

While the 6in (15cm) model was made in decent numbers there are a wide number of different colour variants – as seen in these two examples offered for sale by Biddle & Webb (20% buyer’s premium) in Birmingham on February 19.

They made similar prices, selling at £2200 (in predominantly brown and white) and £2400 (with the addition of a blue glaze).