‘Resurrection’ scenes by Stanley Spencer (1891-1959) hold a special place in the artist’s canon. 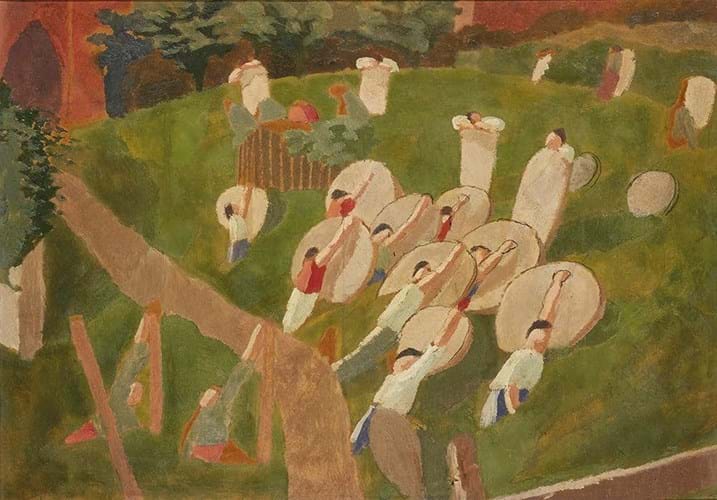 The Resurrection, Cookham by Stanley Spencer. Knocked down at £320,000 at Roseberys, it set an auction record for a work on paper by the artist.

These portrayals of the village of Cookham as a setting for miracles and divine intervention were a key part of his oeuvre. Today, they are also venerated commercially.

A relatively modestly scaled work from 1920-21 drew dramatic competition at Roseberys in south London last week. The oil and pencil on paper laid down on board titled The Resurrection, Cookham was offered at a 127- lot sale conducted for the descendants of the family that ran the dealership Arthur Tooth & Sons.

The price set an auction record for a work on paper by the artist, surpassing David And Bathsheba, a pen, ink, charcoal drawing from c.1912 that made £110,000 at Sotheby’s in June 2011.

The subject of the work sold in West Norwood on February 21 relates to Spencer’s belief, as a devout Christian, in a joyful day of resurrection where everyone, including his friends and ‘loves’, would be raised from the dead to receive God’s grace or judgment. In a precursor to his monumental painting also called The Resurrection, Cookham from 1924-7 (now in Tate Britain), this colourful but loosely handled picture shows figures uprooting their headstones as they emerge from the grave.

The subject matter was bolstered by its provenance and exhibition history. The work was originally owned by artist Henry Lamb, a friend and patron of Spencer. The pair met in 1913 and both artists served in the medical corps during the First World War. Spencer later painted the Tate’s painting in Lamb’s studio which may explain how he came to own the current work.

Arthur Tooth acquired the picture directly from Lamb’s wife and it remained with Dudley Tooth, who ran the gallery in London’s Haymarket from the mid-1920s, before passing to his descendants when he died in 1972.

In terms of its exhibition history, it had featured in the two most important Spencer shows of recent times – the exhibition at the Royal Academy in 1980 and another at Tate in 2001. Another work sold at Roseberys’ Arthur Tooth & Sons sale was Dorelia in the Garden by Augustus John. It fetched £148,000.

Overall, Roseberys’ auction was a white glove affair, raising a premium-inclusive total of close to £1m.

Among other lots dramatically exceeding estimate was Augustus John’s (1878-1961) Dorelia in the Garden from 1912, an early work showing the artist’s common-law wife and most famous sitter Dorelia McNeill in bohemian garb (she often wore homemade clothes as the couple travelled across southern England in a Gypsy caravan).

The sale included a group of eight Paul Nash (1889-1946) watercolours – part of Dudley Tooth’s personal collection rather than the gallery’s stock. Pitched at attractive levels, they all sold above estimate for a £127,500 combined total with the auction house reporting trade, private collectors and institutional buying.