In 1934 a cooperation agreement was concluded with BMW which allowed Middlesex-based Frazer Nash to import and sell cars under its own brand name as ‘Frazer Nash-BMW’. The cars were built by BMW and supplied to Frazer Nash already badged as Frazer Nash-BMW, with imperial instruments and in right-hand drive. When fitted with the 2-litre engine, they were known as ‘Frazer Nash-BMW 327/80’. This arrangement continued until the outbreak of war in 1939 when, unsurprisingly, it was rapidly terminated. Only 19 Frazer Nash-BMW 327/80s were imported and, it is believed, only 12 remain. This example sold for £128,000 at Silverstone Auctions (12.5/10% buyer’s premium) in Hendon on March 5.

It would be natural to assume that the Great Depression of the 1930s caused widespread strife for the motoring industry with output down and car ownership falling.

In fact, the decade was something of a golden period with the number of cars on UK roads doubling to two million.

It was in the 1930s that the pleasures of owning a car could be enjoyed for the first time by the middle classes. Mass-production techniques caused a steady drop in prices, enabling more people to drive to work or take on a car for leisure activities.

Annual UK car production, which had been just 25,000 in 1919, reached 341,000 by 1938. While some smaller manufacturers certainly struggled – those that could not afford the capital to expand their production lines often went to the wall – their design talent ended up at larger firms.

Cars in the UK and the US began to be marketed on their looks, not just their performance. Cars no longer looked like contraptions of yesteryear and were also kitted out with a raft of other innovations.

Considered new luxuries at the time, these are features that we have long taken for granted in our modern vehicles.Car radios became a standard feature: a factory-fitted AM radio appeared in 1933 thanks to British firm Crossley, for example.

Windscreen wipers were fitted in 1935 on the Triumph Gloria and Vitesse; in the US Nash introduced the first relatively compact, efficient and factory-fitted heater; in 1939, Buick installed flashing red lights to the back of its cars to act as indicators; the 1939 Plymouth Deluxe convertible sported a power-operated roof; Mercedes launched the first proper diesel-powered production car and the first automatic gearbox was fitted to an Oldsmobile Hydra-Matic by General Motors.

Style counted more than safety. With more than 7000 road deaths occurring annually in the UK in the early 1930s (that number is now under 2000 a year in the 2020s), new measures were needed, particularly to safeguard pedestrians who accounted for about half the fatalities.

On April 14, 1931, the first edition of the Highway Code was published as one of the provisions on the Road Traffic Act 1930.

It cost one penny and its flimsy orange covers housed 24 pages, three of which were advertisements and four of which provided illustrated details of the hand signals drivers were expected to use. 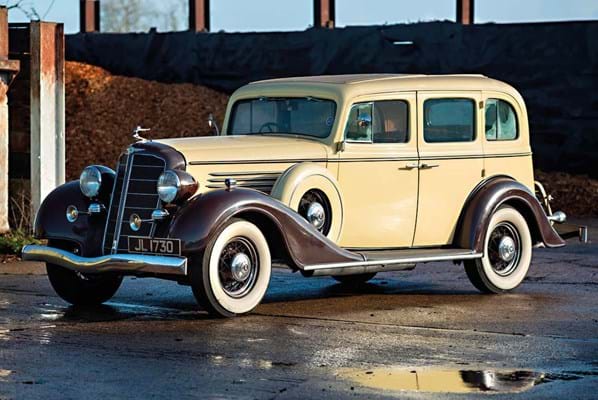 Compulsory driving tests were also introduced. as was compulsory third-party insurance. A 30-mile-an-hour speed limit was imposed in all built-up areas; the first cats’ eyes gleamed in the roads and pedestrian crossings provided some reassurance for other road users.

This motoring heyday was brought to an abrupt end by the onset of war in late 1939.

The major car factories were required to make machinery for the war effort and the number of new cars produced dwindled to just a few thousand a year until 1946.

All the more reason to enjoy the 1930s classic cars that have survived and appear at today’s auctions. Unlike some works of art or vintage watches whose value may be eroded by renovation, cars in a poor state of repair can be lovingly restored and become more valuable. Although the cost of the repairs and upgrading the interiors will always outweigh the value added to the sale price, they make these almost-antique vehicles a joy to own and drive.

Here we review a few highlights of cars from the 1930s sold at recent auctions before a selection of notable sales of vehicles from other decades that illustrate the vibrancy of the current market for classic cars.

A lens makes its marque