A selection of 11 upcoming lots from auctions taking place around the UK and Ireland. They were transformed into ‘The Darling Family’ – parents Arthur and Sylvia, and their sons (‘The Davies Boys’) George, John also known as ‘Jack’, Michael, Peter, and Nicholas. Barrie became ‘Uncle Jim’ and a close friend of the family.

However, the children suffered an unfortunate childhood with Arthur dying in 1907 and Sylvia shortly after in 1910. Barrie became ‘The Davies Boys’ legal guardian and the success of Peter Pan allowed the author to provide for all of the brothers.

John (‘Jack’), the eldest, was found a place at the Royal Naval College at Osbourne and attended from 1906 onwards, becoming a serving officer in the Royal Navy during the First World War in the north Atlantic. He was appointed to the naval rank of lieutenant commander in 1924.

The Adam Partridge saleroom in Liverpool is selling Jack’s RN officer’s dress bicorn hat, epaulettes and sword belt worn during service and gifted to him on his retirement.

They have been consigned by the vendor having passed down from his father, who was rector of St Endellion’s Parish in Cornwall where Jack retired to with his wife. The items were a gift and have remained with the vendor’s family ever since. A group of Second World War medals awarded to a young apprentice for bravery at sea is up for auction at Sherborne, Dorset, saleroom Charterhouse on June 9-10.

Ian Alastair Clark was born in South Africa in 1924. He joined up as an apprentice in 1941. In 1942 he made his first full voyage on the Congella. In 1943 his ship was attacked and sunk by a Japanese submarine. The Master was mortally wounded and pinned down by debris, and issued the order to abandon the ship which was on fire. Apprentice Clark, aged 18, stood by the dying Master rendering what help he could.

As one of the last to leave the vessel he took charge of a lifeboat which had been damaged. With 29 other survivors the boat needed constant bailing to keep afloat. After four days and 180 miles of sailing they were spotted by two Catalina aircraft which landed in rough seas and rescued them.

For his action, Clark was awarded a British Empire Medal and also a rare Lloyd’s Medal for Bravery at Sea. 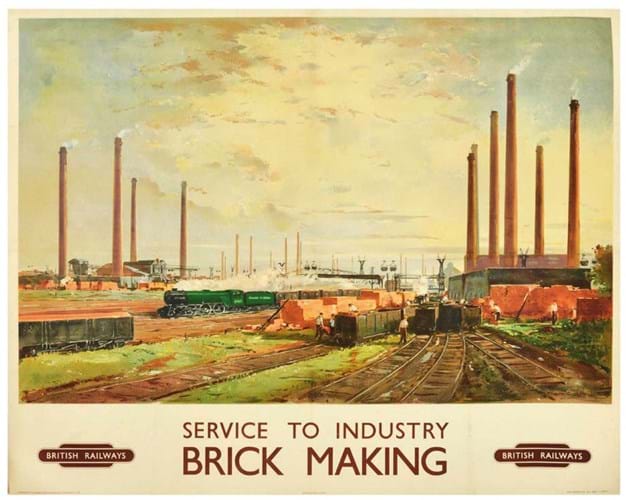 This original 1950s British Railways travel poster – Service To Industry Brickmaking – with artwork by Charles Cundall (1890- 1971) has a guide of £180-360 at the posters sale held by specialist Antikbar in London on June 11. The Duke’s of Dorchester book sale on June 17 includes around 50 books from the library of a local collector of English and, most particularly, Dorset literature who sought out important association copies and first editions while forming his collection over the last 30 years.

The owner’s father owned the garage close to TE Lawrence’s tiny house, Clouds Hill. His father knew Lawrence well, even working on his famous motorbike. Lawrence bought his Dorset retreat in 1924 in order to finish his account of the war which became Seven Pillars of Wisdom.

The sale includes a copy of the subscriber’s, or ‘Cranwell’, edition of Seven Pillars of Wisdom, this one being one of a very few bound in full vellum (London, privately printed, 1926). The estimate is £30,000-50,000. It is pictured above with the frontispiece portrait of King Feysal.

The father also uncovered Lawrence’s bank manager’s copy of the prospectus for the book The Foundation of the Arab Revolt which includes the suppressed first chapter and Lawrence’s own copy of John Masefield’s Saltwater Ballads, which he took to the Paris Peace Conference in 1919 and which later resided in his library at Cloud’s Hill, not far from the auction house. This set of four Scottish provincial silver shell pattern teaspoons with marks for William Ferguson of Forres, c.1825-35, comes for sale at Huntly Auctions of Turriff, Aberdeenshire, on June 21. The estimate is £800-1200.

Ferguson worked in Elgin but retailed some of his wares in Forres struck with the town’s caste mark. This small late 18th century glass ale flute with a facet cut stem is cut and engraved to the bowl with a two masted sailing ship below a star, and the inscription Prosperity to the Northumberland. In good condition, it has an estimate of £700-900 at Hartleys in Ilkley, West Yorkshire, on June 8. Three years after it was painted by the Anglo-Hungarian artist Philip de László in 1911, Country Life devoted two editions to Lord and Lady Northcliffe and their Tudor manor house home, Sutton Place in Surrey.

At the time the frontispiece of the magazine would generally feature the portrait of a young woman of society – a feature that became known as ‘girls in pearls’.

László’s portrait of Lady Northcliffe appeared in issue 892, published on February 7, 1914 (although it seems the artist was not happy about that).

László had painted Lord Northcliffe in 1908. The portrait is now held by the trust that owns the Daily Mail and is believed to hang at Northcliffe House, the London headquarters of the newspaper.

In spring 1911 László invited Lady Northcliffe to sit for him. She gave the finished portrait to her husband as an unexpected gift. Lord Northcliffe sent a letter of thanks to the artist. He offered to pay for the portrait but the artist declined: “As I myself asked Lady Northcliffe to give me the opportunity to paint her portrait you can understand that it is not possible for me to reply to your kind request.” This pair of 10in (25cm) Austrian cold painted bronze candle holders, each in the form of Ibis storks standing by reeds, have the amphora mark for Franz Xavier Bergman (1861-1936). This version comes with a nickelled brass radiator cap by Breves Galleries of Knightsbridge that has been later mounted on a wooden plinth.

This Georgian silver nutmeg grater with bright cut engraving, steel grater and monogrammed base is marked for Joseph Taylor, Birmingham, 1800. At the timed online sale of silver and plate items at 1818 Auctions in Milnthorpe, Cumbria, closing on June 5 it is guided at £150-200. Full set of early pictorial playing cards which together form a map of Britain – estimate £10,000-15,000 at Dominic Winter.

The Dominic Winter sale in South Cerney on June 15 includes an extremely rare full set of early pictorial playing cards which together form a map of Britain.

Engraved by James Moxon with suit signs and numbers added by hand, these were issued by the publisher John Lenthall (c.1718-44) sometime in the 1720s or 1730s. Only one complete set has been offered at auction before (Christie’s 2003) and the British Library does not appear to own one.