The city of Bradford in West Yorkshire has been named the new City of Culture 2025 which is estimated could bring an extra £700m into the district and attract more than a million visitors by 2030.

Among the area’s most important attractions are the Victorian textile mills, no longer the “dark Satanic mills” described by William Blake, but with many being creatively and commercially brought back to life in these most architecturally splendid buildings.

Here we look at a few antiques businesses in and around Bradford including three in former mills.

Two miles from Haworth, visited by 80,000 people every year in a pilgrimage to the Brontë family home, is the village of Cullingworth.

The former textiles mill is an antiques centre, Antiques at the Mill, which opened in 2014 and now has 50 dealers selling over two floors.

Director Julia Richardson said: “Sales have increased, footfall is good and we are currently renovating two more floors to create an even larger centre.”

Dealer and furniture restorer Brian O’Connell of Park Antiques, who has been in the trade for 40 years and who took on the lease in 2021, sells fine antique furniture and says that business is looking up and that he has recently sold Georgian mirrors and a chest-on-chest among other high end pieces. Pete Robbins owns Terrier Antiques in Hebden Bridge in West Yorkshire, a town once described as ‘feeling festive even on a wet winter Tuesday’.

“We moved here a year ago from our original small shop in Cleckheaton. Hebden Bridge is very much a tourist town so weekends can be very busy indeed,” said Robbins.

“Business is good with a fairly even split between traditional shop sales and online sales. At the moment clocks are going well plus wooden boxes and silver vesta cases.

“I collect myself, silver decanter labels being the latest, but they usually end up in the shop and then sold.” The Pillement violone priced £41,500 by the Early Music shop, shown here being played by Pascal Smets, a classical double bassist.

Walking by the world’s largest source of early musical instruments, the Early Music Shop at the Victorian Salt’s Mill in Saltaire, once the largest industrial building in the world, you might experience some of the sounds made by players trying out baroque trumpets and sackbutts, medieval fiddles and Renaissance drums.

Owner Anthony Calvert said: “Most of the instruments we sell are copies of originals but we do have a few original instruments including a Pillement violone or double bass handmade in France in 1781.”

Part of a collection in the Royal Court of France, saved from the French Revolution and fully restored, the Pillement costs £41,500 and is shown here being played by Pascal Smets, a classical double bassist. 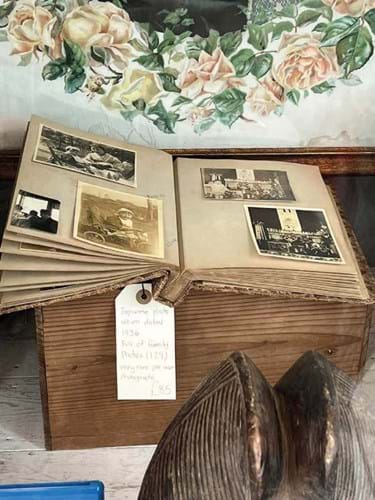 Caroline Brown of Rose & Brown runs vintage home and fashion fairs in Saltaire but you will need to wait until Saturday, December 10, for the next one.

Three miles north of Bradford is the village of Idle where PBFA members Ros Stinton and Michael Compton are anything but idle.

Their bookshop Idle Booksellers sells antiquarian and out-of-print books, specialising in Yorkshire material, of which they have 3000 titles with 2000 of these on Bradford, Leeds and the West Riding. They comprise all sorts of local and family history ephemera and pamphlets as well as parish registers, always a boon to genealogists.

Compton and Stinton stand at the PBFA fairs held in Yorkshire, including the next two-day local book fair in Ilkley on Friday and Saturday, July 29-30.

Ex-courthouse venue in Pontefract judged to be just right