Among the 20th century works on paper generating demand at regional sales in the last few months was a Keith Vaughan (1912-77) study of a group of bathers. The artist had a recent boost from Christie’s sale of the Sir Nicholas Goodison collection in May which recorded the three highest prices for Vaughan (with a record £560,000 set for the large abstract oil painting Sixth Assembly of Figures).

The 5¼ x 8½in (14 x 22cm) gouache on paper here came to auction at Duke’s (25% buyer’s premium) of Dorchester from a private Dorset collection and retained a label on the back for Thomas Agnew & Sons showing it had been purchased from the London dealership back in 1968.

Offered at the Art & Design post 1880 sale on April 29, it appeared just under a month before the Christie’s auction. The following lot was another Vaughan work on paper titled Men in a Wood. The 12½ x 10¼in (32 x 26cm) sketch was a gouache, wash, pen, ink, pastel, wax crayon on paper which was signed and dated ‘57 in the lower right.

The picture came to auction from a private London vendor but had previously been owned by Sebastian Walker, who formed an impressive collection of Vaughan works (47 of which were sold in a dedicated Sotheby’s auction in 1991).

With this example showing the figures less fully resolved than is often the case, it was duly estimated at the lower pitch of £5000-8000. This proved a sensible level as it drew a decent competition and ended up selling on top estimate. 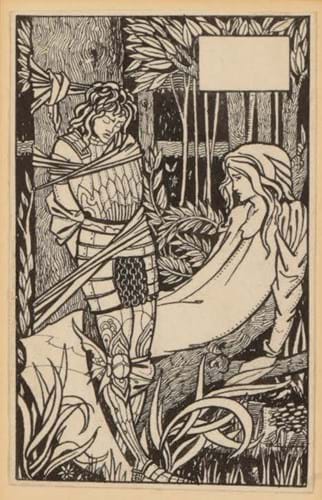 An illustration by Aubrey Beardsley for a chapter heading in Le Morte d’Arthur – £8500 at Duke’s.

In terms of the 19th century works in the Dorchester sale, a group of three pen and ink drawings by Aubrey Beardsley (1872-98) came from a private Dorset source and had also been bought from Agnews in 1968.

The three small sketches, which were offered as separate lots at Duke’s, were all illustrations for chapter headings for the 1893-4 Dent edition of Thomas Malory’s classic novel Le Morte d’Arthur. Featuring a rich selection of drawings, foliated openings as well as 62 full-page black-and-white illustrations, the publication made the young Beardsley famous almost overnight.

His original illustrations for the project do emerge occasionally at auction, the highest price among those sold so far being the £32,000 for How la Beale Isoud wrote to Sir Tristam that sold at Bonhams in 2008. An ink drawing used for the front wrapper made £12,000 at Sotheby’s in 1997.

While these works at Duke’s were under half the size of the full-page illustrations, they had considerable appeal to Beardsley collectors. The most impressive of the three was offered first, a 5¾ x 3¾in (15 x 10cm) sketch depicting a knight bound to a tree, presumably Sir Lancelot, and a maiden in a forest. Estimated at £8000-15,000, it sold at £8500.

The other two lots were somewhat plainer sketches and commanded less money. An illustration of a maiden in a forest, her wrists bound to trees fetched £3800, while another of La Belle Isoud in her bedchamber made £2800. Both sold below estimate.