The full fall-out from the record-breaking Dr John P Driscoll sale of British studio ceramics is yet to be understood. Doubtless the market is strong but many of the prices in the sale (held by Phillips in association with Maak Contemporary Ceramics on November 10) were well above the levels at which most collectors have operated in the past. Sustaining them will be difficult.

However, the signs from the first ‘post Driscoll’ sales have been largely positive.

The price is the second highest for Leach and not too far away from the record £77,000 bid for a similar dish, c.1924, in the Driscoll sale.

Bonhams’ dish with its lustrous ‘galena’ glaze has a full provenance. Signed and dated 1925, it was gifted that year by Leach and Michael Cardew to Leo and Eileen Baker on the occasion of their wedding in 1925.

It was one of five lots from the estate of Leo Kingsley Baker (1898- 1986), the founder of a handloom weaving business in Chipping Campden known as the Kingsley Weavers. Baker and Leach were good friends in the 1920s-30s. Like the Driscoll dish (which had some small patches of glaze loss to the tree), it was not in perfect condition, showing two rim chips.

Odundo on a high The Maak (20% buyer’s premium) sale on December 2 was topped, for the third auction in a row, by the work of Kenyan-born potter Dame Magdalene Odundo (b.1950) who now enjoys the sort of financial rewards shared only by pots by Hans Coper and Lucie Rie.

In November last year the firm posted a record for a living ceramic artist with the sale of the 1988 Angled Mixed Coloured Piece by Odundo (b.1950). Selling at £200,000, it was pictured on the front cover of ATG No 2470.

The 14in (35cm) Untitled vase offered in this sale was signed and dated 1989 and had been acquired by the vendor directly from the artist in May that year.

It was in the burnished and carbonised terracotta that is Odundo’s signature medium but, unlike the record-breaker, assumed a symmetrical form. Traditionally these have not been priced quite as highly as the asymmetrical works so evocative of the human form, but this example came close to changing that when it took £190,000 (estimate £40,000-60,000). 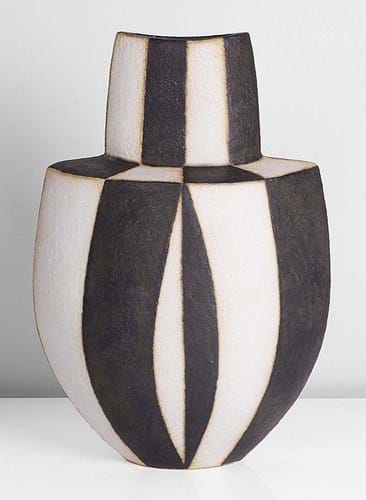 The sale was also notable for the £18,000 bid for one of John Ward’s (b.1938) hugely popular matt black-and-white panelled ovoid vases produced in the 1990s. Shouldered Vessel, standing 11in (27cm) high, acquired by the vendor from the West Wales Art Centre, Fishguard, in 1995, now shares the auction record for Ward with a similar vessel Maak sold in May 2016.