This 18ct gold and enamel medal was awarded to Reginald Arthur Whitcombe (1898-1957) for winning the 1936 Open Golf Championship of Ireland. 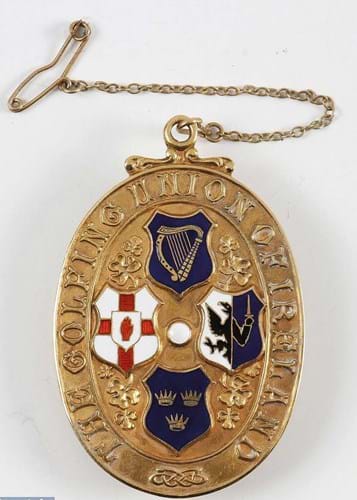 The tournament was played at the Royal Dublin Golf Club with Whitcombe (runner-up in the previous year to his brother Ernest) coming in with an aggregate score of 281.

The Irish Open was first played in 1927 and was contested annually, except for the war years, until 1950. There was a tournament in 1953, but the event was then not played again until revived in 1975.

Whitcombe was in the best form of his career at the time. He finished runner-up to Henry Cotton at the 1937 Open Championship at Carnoustie and in 1938 won the windswept Open at Royal St George’s where his two final rounds of 75 and 78 were still enough to beat the halfway leaders by 10 strokes.

The medal, later converted to be worn as a brooch, was made by made by West & Son of Dublin and comes in its original box.