How majolica mania takes over 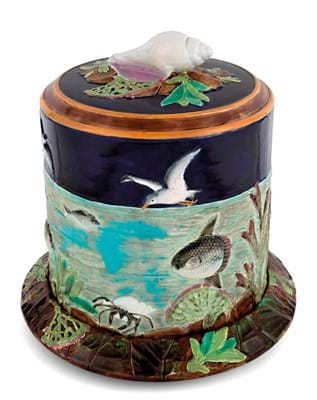 Majolica ware is the boldly colourful and highly decorative class of glazed earthernwares that was so popular in the second half of the 19th century with firms such as Minton, Wedgwood and George Jones among the major and most inventive producers.

Whether in the form of massive vases, garden seats, teapots, dinner plates or pieces in Renaissance style, the decoration on these ceramics was always eye-catching and sometimes quirky and downright witty.

Joan Stacke Graham (1934-2020), was a passionate enthusiast for this type of ceramic ware a founding member and President of the Majolica International Society.

She began collecting in the 1980s alongside her friend Dr Marilyn Karmason and between them they amassed over 2000 pieces in their combined collections. With Stacke Graham researching, Karmason providing the text and Stacke Graham’s husband and daughter the photography, they also joined forces to produce Majolica: A Complete History and Illustrated Survey. The book remains a major reference work in the field.

She and her family also loaned pieces from her collection to Majolica Mania, a major exhibition celebrating this class of ceramics in England and the US from 1850-1915, which opened last year at the Bard Graduate Center in New York and continues this year at the Walters Art Museum in Baltimore.

Last December Doyle (26% buyer’s premium) in New York held the first of two single-owner auctions offering majolica from Stacke Graham’s collection. The second sale, which is scheduled to take place in the autumn, will feature the pieces currently on show in Majolica Mania plus a similar cross-section of works to part one.

On offer on December 14 were just over 140 lots, a representative selection of the pieces Stacke Graham collected encompassing works from the English firms of Minton, George Jones, Wedgwood, Holdcroft, Brownfield, Brown Westhead Moore and Co, a few continental pieces from makers such as the French ceramicists Delphin and Jerome Massier and some examples by American makers. The auction generated considerable local, national and international interest and all bar a handful of items, 97% by volume, changed hands to raise a premium-inclusive total of $466,683. Buyers, said Doyle, were predominantly private collectors.

Majolica was a very collectable category at the end of the last century and values probably peaked in the late 1990s. Although some pieces in this auction went substantially over estimate and some sold below, the majority made sums that were within the auction house’s predictions.

“As expected, the rarest and most desirable pieces garnered the greatest interest and achieved the strongest prices”, noted Malcolm Mac Neil, Doyle’s specialist for the sale. “One aspect I particularly liked about this sale and collection was that there was truly something for everybody and individuals could participate at different price points.” Minton, the Staffordshire firm which produced a prolific range of majolica, was, not surprisingly, very well represented in the collection and this factory.

It provided the top price of the sale in the form of a large, rare cobalt ground Victoria covered wine cooler. The 2ft 1in (63cm) high vessel, which is illustrated in Karmason and Stacke Graham’s book, had decoration that included alternating fox and rams’ heads, grapevines and views of two hunters capturing a bear. It was designed by Pierre-Emile Jeannest, the son of a French bronzier who was employed by the factory c.1848. Two distinctive examples of Continental majolica by Delphin Massier in the form of oversized insects were also in demand, making sums well above their estimates.

The other was a 20½in wide x 16¼in high (52 x 42cm) jardiniere modelled as a butterfly set on a pink chrysanthemum which Stacke Graham acquired on eBay from South America. This model was produced in two sizes but no other example of this rare large size is so far known. The professionally restored piece dated from c.1890 and had a black painted upper case mark Delphin Massier/Vallauris. (A.M.). It quadrupled its estimate to take $20,000 (£15,150).

Garden seats were a feature of the collection – Stacke Graham had a display of nine set out in what was termed the ‘garden seat wall’ in her New York apartment – and these also proved very popular with bidders (MacNeil thought that buyers find these stylish seats work very well with today’s modern design aesthetic).

A Wedgwood example is pictured above along with the wine cooler, the insect models and a representative selection from the collection across different price points.