Capturing ‘the sentiments of a recovering nation’

The original watercolour draught for Sydney Harbour Bridge that featured on the front page of ATG No 2538 was bought by the Australian National Maritime Museum, it has been revealed. 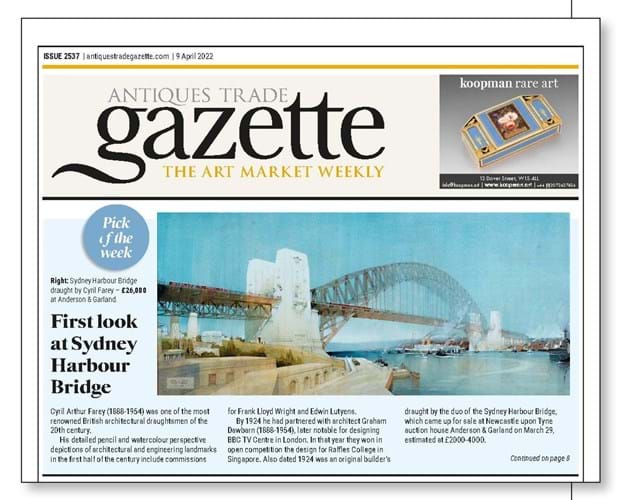 The large painting by British draughtsman Cyril Farey sold for a hammer price of £26,000 at Newcastle upon Tyne auction house Anderson & Garland on March 29 – thought to be an artist’s record.

Signed and dated 1924, it had been completed for Middlesbrough steel production company Dorman Long. Farey’s draught helped sell the winning design, painting quite accurately how it would look when finally opened in 1932.

Dr Peter Hobbins, head of knowledge at the museum in Sydney, said: “This is a beautiful watercolour – everyone who sees it falls in love with it. As a historian, what draws me to the painting is how it captures our maritime history and the sentiments of a nation recovering from the First World War.

“It features the pride of the Royal Australian Navy, HMAS Australia, alongside the vigorous movement of commercial shipping.

“The bridge’s pillars also served as monuments to the fallen of the Great War and were built from the same sandstone as the Cenotaph in Martin Place.

“Farey clearly understood these powerful ties, especially in the aftermath of Australia’s enormous wartime sacrifice. His masterly draught is truly visionary, stretching from the past into the future.”

This purchase was supported by the Australian National Maritime Museum Foundation.