It topped a contents sale conducted at the County Dublin estate by Castlecomer auctioneers Fonsie Mealy on September 8.

In his History of Howth and its Owners, published by the Royal Society of Antiquaries in Ireland in 1917, Francis Ball writes: “On the walls there hung a whole-length portrait of Swift by Bindon, unique amongst portraits of him, in that its history is determined with absolute certainty.”

The 7ft 4in x 5ft (2.22 x 1.53m) Howth portrait, offered in its original oak-leaf carved frame, is considered the primary version of several painted by the County Clare artist and architect Francis Bindon (c.1690-1765) in the 1730s. Others are in the National Portrait Gallery in London, the Deanery of St Patrick’s Cathedral and the Crawford Art Gallery, Cork (a picture bequeathed by Swift to his housekeeper).

Painted in wig and full clerical robes, Swift is depicted holding a scroll on which is written The Drapier’s Fourth Letter to the Whole People of Ireland. Alongside him, grovelling on the ground, is a caricature of William Wood who clutches a ‘patent’.

The imagery relates to the famous Swift satire that attacked the granting of a licence in 1722 to the Duchess of Kendal (a mistress of George I) to issue copper coinage for Ireland. She had quickly sold the patent to Wood for £10,000 sending alarm through Dublin that the existing currency would soon be devalued.

Using the pseudonym ‘Drapier’, Swift had penned letters pouring scorn on the proposal. In the fourth of Drapier’s letters, he wrote: “One great merit I am sure we have, which those of English birth can have no pretence to, that our ancestors reduced this kingdom to the obedience of England, for which we have been rewarded with a worse climate, the privilege of being governed by laws to which we do not consent, a ruined trade, a House of Peers without jurisdiction, almost an incapacity for all employments; and the dread of Wood’s halfpence.”

Although a reward was offered for the exposure of the author of the letters, Swift was not betrayed and the proposal to issue the coinage was quietly withdrawn. 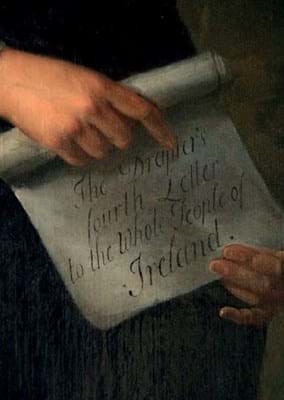 The campaign had won Swift the admiration of many Irish families and during the early 1730s he became a frequent guest at Howth Castle. Lord Howth had commissioned Bindon to paint Swift’s portrait in 1735. In a letter to his friend Sheridan dated June 16, 1735 Swift said: “I have been fool enough to sit for my picture at full-length by Mr. Bindon, for my Lord Howth.”

In view of the importance of this picture, it was essentially off-limits to international bidders when offered as part of the contents of Howth on September 8. As with other culturally sensitive lots in the catalogue, the Irish State will be given the chance to buy it at the hammer price – an option that now remains open for three months. For that reason the estimate of €300,000-400,000 proved a little ambitions but it sold at €234,000 (£200,000) plus premium to a buyer who, it is understood, is intending to keep it in Ireland.

In October 2018, the Gaisford-St Lawrence family agreed to sell the Howth estate to an investment group that intends to redevelop it as a luxury resort.

Anglo-Saxon brooch recovered but rest of hoard still at large