Chelsea turns back the clock to move forward in style For its 70th anniversary and the first event under new management, Chelsea Antiques Fair opened with a successful preview evening on September 21 and continued with busy trading until closing on September 26.

The feedback from the dealers on the approach chosen by organiser 2Covet was overwhelmingly positive, citing the well-curated spaces and the high calibre of invited attendees.

Although the Chelsea Old Town Hall venue can be a difficult space to exhibit in due to small rooms and long corridors, the layout chosen created a cohesive and intimate fair space.

Visitors gave a similar response, saying they could explore the different stands without feeling overwhelmed as each room seemed like a different event.

Caroline Penman, the previous organiser, was “delighted” with how well it was presented and felt that 2Covet had “brought it back to the way it looked and felt in the 20th century”. The fair had been revamped with the intention of showcasing a more intimate choice of dealers, with a variety of objects intended to suit the palate of many collectors.

Alongside these decorative art dealers were Modern British art specialist Freya Mitton and David Brooker Fine Art with a collection of English and European paintings.

For example, on the first day the fair was open to the public, Hansord had already sold a large 18th century walnut cabinet for £22,000.

Other pieces that sold early included a studio pottery vase from Andrew Muir for £3000 and a French 18th century Ormolu mantel clock in the region of £6000 from Richard Price & Associates. 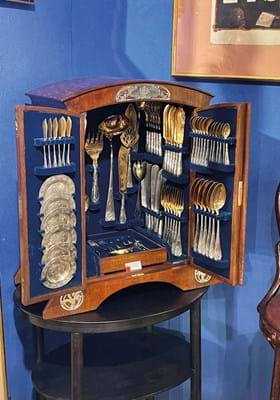 The weekdays, while relatively quiet, still attracted a steady stream of interested clientele with intentions to purchase. The fair ended on a busy weekend, boosted by visitors to the area who had come to view the nearby Chelsea Flower Show.

Sophie Wood, fair director, says the event has been “reborn in such a fine style” with 70% of spaces already reserved for the next one to be held on March 21-27, 2022.