On September 30 Christie’s will offer An Aesthetic Odyssey – The Peter Rose and Albert Gallichan Collection.

Rose and Gallichan’s home at Montpelier Villas, Brighton, was furnished in the Aesthetic movement style. This oil of Boscastle was painted by John Holland (c.1831- 79) over 150 years ago but the view is little changed – the fisherman’s cottage in the foreground and harbour wall in the picturesque Cornish village remain much the same.

The painting will be offered at Bearnes Hampton & Littlewood in Exeter on October 5 with an estimate of £1000-1500. The 277 numbered pages (about 170 pages completed with recipes) include concoctions such as ‘The Hott Surfett Water, An Approved Water to heal ye Lungs & to allay ye heat of a ffeavour & to help one of a consumption if it be not too far gone’.

twgaze.co.uk or see this item at thesaleroom.com This Arts & Crafts oak chest of drawers with iron heart and quatrefoil handles has an ivorine plaque for Liberty Of London Regent Street. This Coade stone boundary marker is one of four included in the Home, Garden & Natural History sale at Summers Place Auctions in Billingshurst on October 5.

Made for St Olave’s Tooley St School founded in 1571 in Southwark, they carry the mark Lithodipyra used by Coade in the 1780s-90s. The school relocated to Bermondsey in 1829 and is now located in Orpington, Kent.

summersplaceauctions.com or see this item at thesaleroom.com

This ebony and boxwood set of Jaques & Son of London ‘Staunton’ chess-men, contained in the original mahogany box, is expected to bring £500-700 at W&H Peacock of Bedford on October 1.

peacockauction.co.uk or see this item at thesaleroom.com 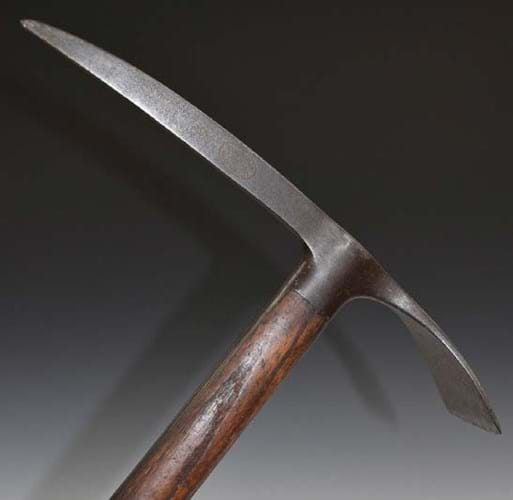 Of particular interest are Somervell’s First World War sketch books and the goggles, crampons and ice axes he used during two early attempts to conquer Everest.

Somervell, who served as a surgeon with the Royal Army Medical Corps in France, was selected for the 1922 and 1924 Everest expeditions, He climbed to 28,000 feet without supplementary oxygen, a record at the time. He later set out to see India, and the poverty he witnessed led him to abandon his medical career in England and go to work in India, during which time he completed many paintings. Plate recalling the death of Captain Cook from a copy of George William Anderson’s 'A New Authentic and Complete Collection of Voyages round the World…', estimated at £700-1000 at Dominic Winter.

This famous plate recalling the death of Captain Cook comes from a copy of George William Anderson’s A New Authentic and Complete Collection of Voyages round the World, undertaken and performed by Royal Authority published in 1784-86.

The compilation bringing together original accounts, additional materials from other sources plus 155 engraved maps and plates provided ‘an authentic, entertaining, full, and complete history of Captain Cook’s First, Second, Third and Last Voyages’ plus other Royal Navy expeditions. Made by Andre Romain Guilmet, Paris, inventor of a number of novelty clocks, it has retailer’s stamps for Dibdin and Company, London. It comes for sale as part of the collection of Manchester racehorse betting magnate Selwyn Demmy (1932-2020), elements of which will be offered across a number of Dreweatts’ auctions this autumn. Seal thought to have been found in Southwold, Suffolk, in the first half of the 18th century – estimate £1000-3000 at St James’s Auctions.

St James’s Auctions will offer a collection of seal matrices put together by former partner AH Baldwin & Sons on October 5.

The 21-lot section, part of the firm’s Premier Sale, includes this seal thought to have been found in Southwold, Suffolk, in the first half of the 18th century and illustrated by Thomas Gardner in his History of Dunwich (1754). It depicts a crowned horse’s head with a lightly engraved legend appearing to read, 1490 Henricus Dei Gra Rex Anglie Franc Dux Lan. The design seems to be making a satirical comment on Henry VI, but by 1490 he had been dead for 19 years. In Edinburgh on October 6, Lyon & Turnbull will sell the contents of Lowood House, Melrose. This has been the home of the Hamilton family since 1947. The eclectic country house collection it contains was amassed by two Scottish lowland families: the Crum Ewings and the Hamiltons.

Although the marks are all but obliterated the most likely candidate appears to be James Kerr, who would latterly go into partnership with William Dempster becoming Kerr & Dempster. This egg-shape form, peculiar to the Scottish silver, is known in around 20 examples dating from c.1719-67. On earlier examples Kerr’s mark is prolific and on later examples the partnerships maker’s mark is also seen. An early 1900s gate leg table which was owned by composer Archibald Joyce, who is best known for his short compositions including Dream of Autumn which was played by the Titanic’s orchestra as she was sinking in 1912, is going under the hammer on September 30 at Special Auction Services in Dudley.

Joyce was the vendor’s great uncle and he sat at this table to write all his music. He died in 1963 and the table has since remained in the family and has always been used, including by the vendor, who along with her siblings, spent many a year doing her homework on it. Seven-volume set of first editions from the Chronicles of Narnia series by CS Lewis – estimate £2000-3000 at Thomson Roddick.

Thomson Roddick conducts a 310-lot sale of Antiquarian & Collectable Books in Carlisle on October 7 where this seven-volume set of first editions from the Chronicles of Narnia series by CS Lewis is guided at £2000- 3000. The books, bound in full red morocco, range from the 1950 printing of The Lion, The Witch & The Wardrobe to The Last Battle (1956).

thomsonroddick.com or see this item at thesaleroom.com The silver sale at Woolley & Wallis in Salisbury on October 5-6 includes this George III silver two-handled beer cup by Paul Storr, London 1819. Chased with trailing hops across a campana form, it weighs 14.8oz. A collection of early Anglo-Saxon coins so valuable they were held in a bank vault for safekeeping was amassed by Canterbury pensioner John Cross.

Following his death last year, Canterbury Auction Galleries discovered the coins and rates them as being ‘among the most important collections of Anglo-Saxon coins outside any UK museum’.

The 80-lot collection, which is expected to raise a total of around £75,000, will be dispersed in a sale on October 2-4, with the proceeds going to two charities – The British Numismatic Society and Friends of Kent Churches – according to Cross’ wishes.

Records found in his park home showed he amassed his collection over a 20-30 year period, spending particularly freely between 2016-17.

The highest-estimated coin in the sale, shown here, is an ‘extremely rare’ gold Thrymsa, or shilling, dating from 640-660 and minted in Northumbria or York, which is estimated at £8000-12,000.

thecanterburyauctiongalleries.com or see this item at thesaleroom.com