Not many sport stars can lay claim to being a committee member of the first Rugby Football Union 150 years ago, scoring a try in the first international rugby match in 1871, sitting on the FA sub-committee created to lay down the rules for the FA Cup and even playing in the side that scored the first goal in the history of the competition in 1871.

That multi-talented star also boasted a son who played rugby for England when they won the inaugural Five Nations Championship in 1910 and was the first try scorer at Twickenham Stadium. And even brothers and descendants who were also talented rugby players.

Such illustrious achievements were celebrated in an April 17 auction at Rogers Jones (24% buyer’s premium) of Cardiff which offered an archive relating to a remarkable Victorian sporting dynasty: the Birketts.

Ephemera, shirts and caps had been consigned for sale by the great-great grandsons of Reginald (Reg) Halsey Birkett (1849-98), a member of the famous Clapham Rovers sporting club, playing in FA Cup finals in 1879 and 1880, winning the trophy in 1880. He was also capped against Scotland as England’s goalkeeper in 1879. Photograph of JGG Birkett from team photo of the England team v Scotland in 1906 – from an album sold for £12,500 at Rogers Jones.

The son was John Guy Giberne Birkett (1884-1967), who played rugby for England 21 times between 1906-12 and scored that first Twickenham try while representing Harlequins against Richmond.

Reg’s brothers Louis and Percival played rugby, the former for England four times, twice in tandem with Reg, including when they won the inaugural Five Nations Championship in 1910.

The earliest lot in the archive was connected to Reg: a pocket journal from 1870-71 relating to every rugby and football team fielded by Clapham Rovers, with handwritten entries by him and newspaper cuttings.

Reg documented matches played in that season, revealing the chaotic nature of Victorian sport as players juggled between rugby football and association football. The 1870-71 season was crucial to the future of both sports.

Rugby until 1871 had been played to various rules. But in 1870 Edwin H Ash, secretary of Richmond Football Club, wrote a letter to the newspapers stating, “those who play the Rugby-type game should meet to form a code of practice, as various clubs play to rules which differ from others, which makes the game difficult to play”.

Thirty-two members of London and suburban football clubs gathered on the evening of January, 26, 1871, in the Pall Mall Restaurant, London, ‘to codify the rules of the game and to provide a central governing body’.

At this meeting, presided over by Edward Carleton Holmes (captain of Richmond FC), the RFU was founded. Rogers Jones says: “The meeting was held halfway through Reg’s journal, so it is not inconceivable that the pocket-journal was present in Reg’s breast pocket as the Rugby Union was formed.”

Laws were drafted, a secretary and a president were elected together with a committee of 13 gentlemen including Reg of Clapham. Two months later, he was playing in the world’s first international rugby match between England and Scotland at Raeburn Place, Edinburgh, scoring the first-ever rugby international try.

The 1870-71 football season also witnessed the first three internationals according to association rules, played at Oval, London. It was a seminal year: rugby union was born, the sport formalised, and international matches of football and rugby commenced their 150-year history. An England international shirt worn by JGG Birkett proved to be the best-seller from the 18-lot archive in Cardiff, taking a top-estimate £18,000.

It was believed be his ‘international career jersey’ (in this early period of international rugby union, players were expected to retain their jerseys for matches, even after players returned to international duty from a four to five-year hiatus of military duty in the First World War). The English rose badges at the time were individually embroidered for each player with differences in detail.

This shirt – in “super condition without notable damage” – was worn on JGG’s England debut, versus Scotland in the Calcutta Cup match of 1906. 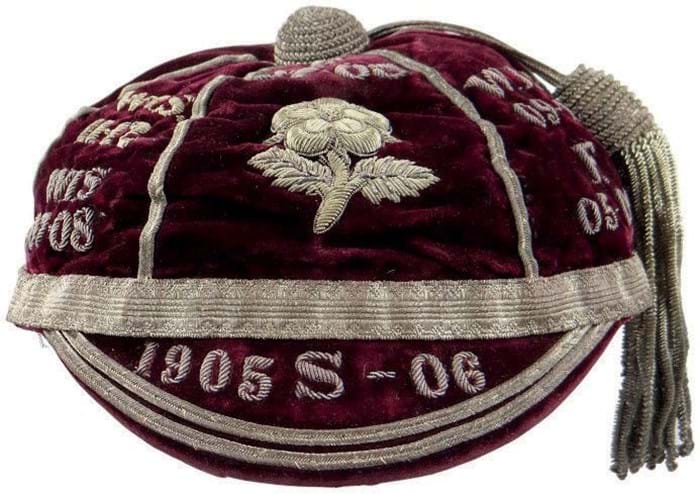 Roger Jones stated: “Considering the sensational condition, provenance, and player history, together with the embroidered complete reference to each of John Birkett’s record England appearances, we believe the cap to be the most prestigious pre-war rugby union cap ever to be offered at auction.” One of the best performers in the archive was a comprehensive photo album related to the RU career of JGG including official England international team images, dating from 1900-12. Guided at £1000-1500, it made £12,500.

A scrapbook related to JGG of many newspaper cuttings, post office telegraphs, 13 dinner menu cards, some with autographs, and other mementos relating mainly to international matches he played, took £2600 (estimate: £200-300). It was during that time he scored the first-ever try at Twickenham in 1909 when Twickenham was their home ground, against Richmond. When JGG made his debut for Harlequins in 1906 against Scotland one teammate was half-back Adrian Stoop, the legendary Harlequins player after whom their later ground ‘The Stoop’ is named. (Another was James ‘Jimmy’ Peters, who was the first black rugby player to represent England.)

The archive was discovered 16 years ago by auctioneer Richard Madley when he visited a house in Oxfordshire to assess some Chinese antiques owned by JGG’s granddaughter, Lady Evans.

Reg’s 1810-71 journals, JGG’s England cap and jersey and his Harlequins jerseys were bought by The Priory Collection on the phone (which also purchased the Dave Gallaher All Blacks jersey Rogers Jones sold for £180,000 in October 2015, a rugby jersey auction record).

Nigel Wray, owner of The Priory Collection, a private collection of sporting memorabilia, and the former chairman of Saracens rugby club, said: “We are delighted to have been able to purchase another historic rugby union lot from Rogers Jones.

“The Birkett archive is probably the most important archive for the early days of rugby union to come on the market. We are very excited at the prospect of adding it to our collection.”

Auctioneer Ben Rogers Jones said: “The collection formed part of our rugby section in our Selections & Collections auction. The total for the auction, from 151 lots, was £167,690. The Birkett archive realised £57,000 against a low estimate of £24,250 and high estimate of £36,900.

“There were 470+ bidders on the auction which was a very healthy number considering the relatively small size of the sale in lots.” The Matthews top-seller was a 1950 Australian rugby union jersey worn by Alan Walker against the British Lions. Matthews was Walker’s opposite number in both Tests. Consigned by family, it sold for a mid-estimate £1800.