Pen and ink sketch of Saint Eilian’s Church in Llaneilian, Anglesey by Alfred Wainwright – £520 at 1818 Auctioneers.

The market for the small but detailed drawings by the fell-walking legend Alfred Wainwright (1907-91) has been buoyant of late – something perhaps derived from the growing appreciation of the great outdoors felt by many during the lockdown.

The latest test came at Cumbria saleroom 1818 Auctioneers (20% buyer’s premium inc VAT) when five sketches from two different vendors were on offer in a timed online auction that ended on February 15.

Wainwright, who was born in Blackburn, moved to Kendal in 1941 and combined his day job at the borough treasurer’s office with fell-walking, illustrating and producing guidebooks.

His detailed monochrome pen-and-ink drawings of the fells led to his seven-volume Pictorial Guide to the Lakeland Fells which is still considered the standard reference work on the subject.

Having produced numerous books and pictorial guides, he remains to fell-walkers what Bradshaw is to railway buffs. Enthusiasts share tips and routes online and often refer to Wainwright’s insights in doing so.

In terms of the art market, his drawings, prints and maps emerge regularly at auction and tend to sell for sums in the hundreds of pounds.

The earliest and best known examples depicting the Lake District’s most notable landmarks or walking routes (especially those featured in his guidebooks) can rise into the thousands, however.

Valuer at 1818 Auctioneers David Brookes said that he has witnessed “a huge increase” in interest in Wainwright’s drawings over recent months.

“People want a connection to Wainwright and to share his love of mountains,” he said. “Wainwright wrote that mountain tops were places to refresh the soul, find new perspectives and banish worries. That’s particularly meaningful right now.”

The auction house in Milnthorpe set a £10,200 record for the artist in June last year when they sold an evocative sketch of mist on Striding Edge, Helvellyn, was that used in Wainwright’s first guide book The Eastern Fells (News Digest, ATG No 2450).

Since then supply and demand has seemingly kept up and, while the current works were perhaps not quite of the calibre of the June offering, all five drew interest and all bar one sold above top estimate. Together they raised £7470.

Two of the drawings were of non-Cumbrian subjects which made them more affordable, even though they came with a highly attractive provenance. The sketches of two Welsh churches represented a lesser-known side of his work despite the fact that he produced three books with drawings of Wales over his career. Alfred Wainwright with his publisher Jenny Dereham, who received the two Welsh views sold at 1818 Auctioneers after the artist died.

They had been given to the vendor by Jenny Dereham, Wainwright’s publisher during the last 10 years of his life.

“Dereham was a good friend of Alfred and Betty Wainwright,” said Brookes. “She first met Wainwright after writing to ask if he would collaborate on a book with well-known photographer Derry Brabbs. It led to a bestselling series of eight large-format books.

“When Wainwright died, Betty invited Jenny to choose some drawings. Having a little Welsh blood, of which she’s proud, Jenny chose the two Welsh churches.”

First up at the auction was a drawing of Saint Eilian’s Church in Llaneilian, Anglesey, a 7¾ x 8¼in (17 x 21cm) signed pen and ink sketch.

The view of the medieval structure with its famous 12th century pyramidal spire appeared in Wainwright’s The North Wales Sketchbook, first published in 1982. Estimated at £300-500, it sold at £520 to an Anglesey buyer. 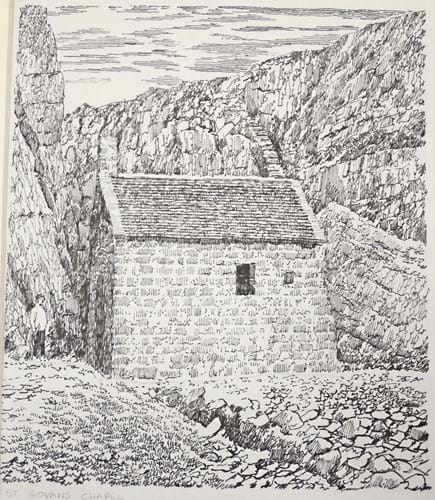 Also previously owned by Dereham was a 7¾ x 6¼in (20 x 16cm) pen and ink from Wainwright’s The South Wales Sketchbook depicting St Govan’s Chapel, a plain and sparse building perched on the cliffs of St Govan’s Head in Pembrokeshire. Estimated at £300-500, it sold at £340 to a dedicated Wainwright buyer.

While these were not in upper echelons of Wainwright prices, they were above average for his Welsh scenes which appear less commonly on the market. The highest price for such a sketch appears to be the £780 for a view of The Boathouse, Laugharne (the Carmarthenshire home of Dylan Thomas) that sold at fellow Cumbrian saleroom Mitchells in March 2019. Two signed ink drawings from a separate Kendal vendor at the auction had more commercial fell-walking subjects and duly drew even more attention. In particular a sketch of Great Carrs, a 2500ft high fell standing above Wrynose Pass in the southern part of the Lake District, commanded strong interest against a £500-800 estimate.

The location made it highly desirable. Great Carrs is one of the Coniston Fells known for its excellent views and ridge linking to another fell called Swirl How. Wainwright, who mentioned it in a number of books when outlining his favoured routes, described it as “an eastern face with an unbroken tumble of crags into Greenburn”.

Measuring 7¾ x 6¼in (20 x 16cm), the signed sketch drew considerable competition before it sold for £3200 to a buyer described the auction house as “a Wainwright fan who has always wanted to own an original”. Pen and ink sketch of The Dutton at Wallbarrow by Alfred Wainwright – £2150 at 1818 Auctioneers.

From the same source was a second fell sketch, depicting yet another spot known for its outstanding views. The 7¾ x 8¼in (17 x 21cm) signed pen and ink drawing of The Duddon at Wallbarrow was also of a known location on a well-trodden Wainwright trail. Offered with the same £500-800 estimate, it sold at £2150 to a Lakeland collector.

The fifth Wainwright drawing at the auction had a Scottish subject. The view of Ben More Coigach, a mountain in the north-west of Scotland, sold for £1260 – another price that was above average for Wainwright and giving further encouragement to this lively niche market.