With fewer collectors and international dealers expected in London this summer, the capital’s high-end art fair 'Masterpiece' migrates online for its 2021 edition A preparatory study for 'The children of Ayscoghe Boucherett' by Thomas Lawrence is available to buy at £185,000 from Patrick Bourne & Co at 'Masterpiece Online'.

For the second year running the event has been unable to take place in its usual spot in the grounds of The Royal Hospital Chelsea because of the pandemic.

Over 120 UK and international exhibitors have signed up for this year’s Masterpiece Online, which runs from June 24-27 on the fair’s website, starting with a VIP preview on June 23. Participants from the fields of art, design, furniture and jewellery have selected nine works each to sell via the online platform. A series of online panel discussions and in-person art tours across central London are also planned.

Among the exhibitors are Patrick Bourne & Co offering a selection of English and Scottish portraiture spanning four centuries and including examples by Allan Ramsay, Frank Copnall and Winifred Nicholson among others. The star, priced at £185,000, is a preparatory study for Thomas Lawrence’s (1769-1830) celebrated group portrait The children of Ayscoghe Boucherett, which hangs in the Louvre.

(Incidentally, Boucherett’s wife Emilia Crockatt was stepdaughter of John Julius Angerstein, whose collection of Old Master paintings was purchased by the British government and became the nucleus of the National Gallery in London.) 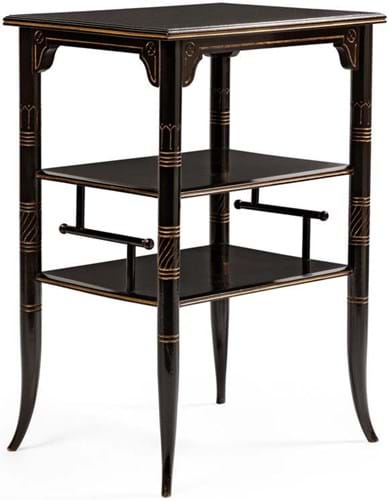 A coffee table by Edward William Godwin is for sale through Oscar Graf priced in the region of £50,000.

Oscar Graf presents Masters of the Victorian Era (1875-1910) showcasing a selection of pieces by major designers and artists of the Victorian and Edwardian periods. Highlights include a c.1885 coffee table by Edward William Godwin (1833-86), which is the only example of its kind known to date and is priced in the region of £50,000.

Returning exhibitor Richard Green showcases highlights from two summer exhibitions: Renoir and the Impressionists and Ivon Hitchens. Hitchens’ River at Avington No 1 (1965) and Fleur sur une Chaise (1927), a powerful still-life by Suzanne Valadon (1865-1938), are among the works for sale.