The first clocks represented the pinnacle of English technology and often lead the way in fashion. 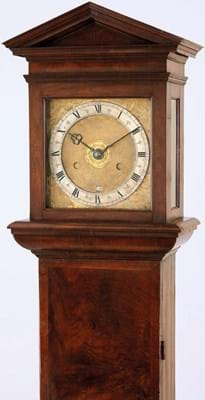 Dated to c.1666, this longcase clock by Joseph Knibb is believed to be the earliest recorded veneered in walnut. The indigenous timber (less expensive than imported ebony) would later become widespread in English case furniture by 1680.

This is also the earliest-known longcase clock to retain its original verge escapement (see detail) and one of only five surviving complete examples by Knibb made in his formative years in Oxford before moving to London c.1670.

Among the highlights of Ben Wright’s newly published catalogue, it is priced at £185,000.