Among the earlier printed books, Bibles played their part in a wide-ranging auction held by Forum Auctions (25/20/12.5% buyer’s premium), and none so financially well as a fine, clean example of Robert Estienne’s Greek text Bible of 1550. 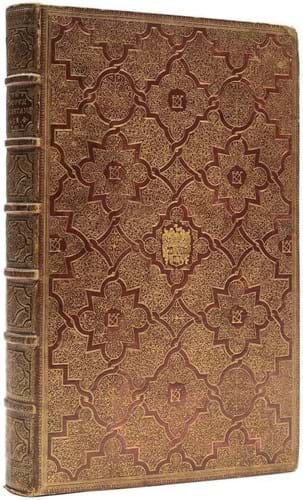 An early 17th century red morocco gilt ‘fanfare’ binding thought to have been made for a 1550 Bible intended as a wedding gift. It sold for £38,000 at Forum.

Featuring Garamond’s types, it was an example of the third and most important of those Greek editions, but it sold at £38,000 rather than the suggested £4000-6000 on the strength of its superb binding and provenance.

Bid to £40,000, one of the more expensive lots at Forum Auctions was a fine set of Purchas his Pilgrimes…, a celebrated continuation of Richard Hakluyt’s Principal Navigations, that had a distinguished provenance.

Comprising first editions of the first four volumes and a fourth edition of the fifth (1625-26), this was a set that later found a place in the very fine library of the parliamentary historian, diarist and bibliographer, Nicholas Lutttrell (1657-1732).

Sold for a notably higher than predicted £14,000 at the May 27 sale was the dedication copy of George Sandys’ Relation of a Journey… that took him to Turkey, Palestine and Egypt.

This 1615 first of his elaborately illustrated work was that presented by its author to the Prince of Wales, the future King Charles I.

The saleroom noted that it is the first book to record tobacco usage in Turkey and that Sandys later spent 10 years in America, where he was Treasurer of the Virginia Company.

In ATG No 2495 we illustrated and noted the sale at a record £37,000 of a magnificently bound copy of the 1675 first edition of David Loggan’s Oxonia Illustrata at Bonhams. A copy of that work offered by Forum sale boasted a contemporary and attractive, but far less elaborately finished binding.

Once part of the library at Blenheim Palace, it sold for £10,000, and aside from that spectacular copy seen recently in Knightsbridge, no other has made more.

Sold at £41,000 was an archive of both printed and manuscript material of the 18th century relating to privateers, Bristol merchants and shipping, and also including related insurance matters.

A key attraction of the lot was a group of 10 previously unrecorded coffee house auction catalogues that feature the sale of cargoes captured by privateers. Most of them feature manuscript notes that include prices and even some of the buyers’ names. Another of the day’s surprise results was provided by a little spotted and stained manuscript of just six pages in contemporary Dutch floral wrappers which sold at £6500 rather than the suggested £600-800. Dating from c.1730, this ‘Liber Scripturae Balabandu’ was the work of Benjamin Schulze, a German missionary who established the first Christian mission in Madras with the support of the SPCK (Society for Promoting Christian Knowledge). The title details on the back of the cover were in Latin but the text is in the Marathi language.

Billed as a magnificent set of the most important production of the Shakespeare Head Press, one of just a dozen examples of the 10-volume vellum-bound sets of the Bard’s works issued as part of its 1904-06 edition, fell just short of the low estimate at £19,000.

Dawn of 1884 and The Witch’s Head of the following year were both three-deckers in the original cloth.

A 1924 first in very fine condition of what was Ernest Hemingway’s second published book, in our time, sold at £19,000.

One of 170 copies of the work in original boards, it was printed in Paris at the Three Mountains Press for sale by Sylvia Beach’s Shakespeare & Company bookstore in that same city.