European ceramics from renowned US collector come to the New York rostrum. The c.1730 du Paquier tobacco box with its porcelain handle lock/tamper which led the Doyle auction of the collection of Sarah Belk Gambrell in New York on June 24 when it sold for $75,000 (£54,350).

In the retail world she coordinated the women’s wear and cosmetics businesses for hundreds of Belk stores across the south of the US. She married the banker Charles Glenn Gambrell In 1952 and the pair maintained homes in her native city of Charlotte, North Carolina, and New York.

Belk Gambrell was a philanthropist, donating to many cultural, educational and medical institutions. She was also an enthusiastic collector assembling over many years art, furnishings and European and Asian ceramics.

Doyle (26/21/15% buyer’s premium) in New York is selling her collection this year. Her Asian ceramics will be auctioned in September and paintings and furnishings in October but first, on June 24, Doyle offered her array of European ceramics. 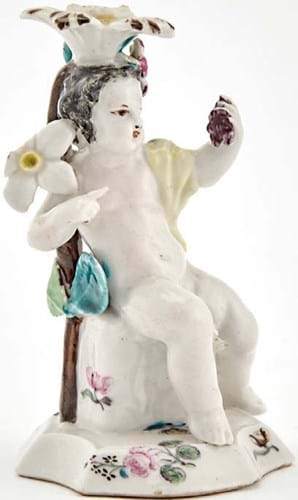 Pieces from the manufactory run by Charles Gouyn known as the St James’s or Girl in a Swing factory, which specialised in making small decorative pieces like scent bottles, are very collectable these days. The Belk Gambrell collection offered this example from c.1750, a 4½in (11.5cm) taperstick modelled as a putto emblematic of autumn. It last appeared at auction at Christie’s in 1994 when it was sold from an Australian collection and was then in the M Mellanay Delhom collection. Here it outpaced a $4000-6000 guide to take $11,000 (£7970).

Belk Gambrell started collecting around the late 1960s. Her selection ranged across many 18th century porcelain factories from Continental Europe and the UK, encompassing figures and tablewares, rarities and more representational examples.

She was helped and inspired in her collecting by M Mellanay Delhom, the ceramics scholar, collector and curator at the Mint Museum in Charlotte, North Carolina, to which Belk Gambrell was a benefactor.

The Belk Gambrell collection featured several pieces of Meissen from a named service made c.1740, known as the Christie-Miller service after the family who owned it in the 1840s. It included this 9½in (24.5cm) diameter documentary bowl painted with a continuous scene featuring figures engaged in various activities, one of which shows two figures in a landscape passing a signpost bearing the date 1740. It sold for $19,000 (£13,770) against a guide of $30,000-50,000.

The Belk Gambrell collection featured not only well-known factories that are widely collected such as Meissen, Vincennes and Chelsea but also pieces from the Longton Hall factory in Staffordshire and the Scottish West Pans factory. Provenances reveal purchases from major auction houses and well-known specialist dealers such as Robert Williams and Errol Manners.

There was an enthusiastic response from English and Continental European collectors and dealers as well as some Asian bidders when the 140 odd lots were offered in New York last month. Eighty-eight per cent of the lots found buyers to total just over $1m including premium.

Rare pieces of Meissen (Böttger stoneware, Kakiemon-inspired designs and pieces from named services) were among the top lots as well as some Vincennes and pieces from the Du Paquier factory. Although English porcelain does not often challenge these Continental counterparts for value, there was a notable exception in a documentary Lund’s Bristol creamboat which made the third-highest price of the day when it sold for $47,500 (£34,420). This small, 1½in (4cm) high piece, which is of silver shape and decorated with Oriental landscapes and flower sprigs, is marked BRISTOL in raised letters to the base making it a rare and very desirable documentary piece from the early period, c.1749- 51, of this 18th century factory.

Described by Doyle as in “overall lovely condition with some kiln speckling”, it was acquired from the well-known porcelain dealership Winifred Williams in 1973.

Another very similar documentary example is in the Gardiner Museum in Toronto, while Bonhams sold an unmarked example in 2016 for £10,000.

Seven pieces from the Viennese du Paquier factory featured in the sale including some particularly choice examples. One of these, a rectangular tobacco jar from c.1730 (pictured top), was the top-seller of the auction at $75,000 (£54,350), a price that was four times the estimate.

The 6¼in (16.5cm) high box is characteristically painted with Japanese-style panels of flowering shrubs within trellis surrounds. It has a square cover with lug handles through which is inserted its shell-moulded, dual purpose crossbar lock and tobacco tamper, a rare surviving feature.

It was last offered at auction in 1969 at Parke Bernet Galleries in New York from the Wetmore estate, Newport, Rhode Island. A similar version is in the Austrian Museum for Applied Arts in Vienna and another was sold by Christie’s in 2003.

A second piece with the same Wetmore/Parke Bernet provenance was a 6in (15.25cm) high baluster shaped covered tankard of c.1725.

It was painted in puce and purple with a scene of two Chinese figures taking tea and playing cards to one side and a pagoda, birds in flight and a small dog to the other while the cover features a large duck and further figures. This also outstripped its $10,000-20,000 guide in selling for $35,000 (£25,360) to the specialist dealer Errol Manners from London, who made a number of purchases at the auction.

The largest representation of pieces from an English factory in the Belk Gambrell sale came not from one of the more prolific or better-known factories such as Worcester or Chelsea but from the Staffordshire factory known as Longton Hall.

There were 31 lots on offer with another five attributed to either Longton Hall or Vauxhall. This afforded a good range of the factory’s products from figures to tablewares. Although virtually all found buyers, not all of them made prices that matched the pre-sale expectations

Pictured here are two examples. The pair of 6¼in (16cm) high tapersticks modelled as long-necked birds shown above are of the type described as the Snowman class on account of their thick covering of white glaze. No other examples of these models are currently recorded. The 8in (20cm) high polychrome decorated quatrefoil shaped jug moulded with strawberry leaves, above, applied with foliage and finely painted with a floral bouquet, dates from c.1755 and was also acquired from a Christie’s sale in April 1971. It sold at Doyle for $11,000 (£7970) against a $3000-5000 guide. Belk Gambrell had no fewer than nine pieces from West Pans, the only 18th century porcelain factory in Scotland.

Some of these were representative examples decorated in the distinctive ground colour known as Littler’s Blue but there were also some polychrome pieces, including this armorial decorated three-aperture inkwell which sold for a mid-estimate $3250 (£2355).

The 3in (7.5cm) diameter piece, which has some chips, hairline cracks and wear to the decoration, is painted with roses and other flowers and the inscription WILLm DICK as well as a blazon of a ship in distress and the motto SPES INFRACTA.
William de Dick was the ancestral head of the Scottish clan Dick and also the first magistrate in Edinburgh in 1296. The family motto translates as ‘Hope goes unbroken’. Oil painting of Nicholas Sprimont with his family, the only known portrait of the proprietor of the Chelsea factory - $35,000 (£25,360) at Doyle.

Another of the top lots in the sale was not a piece of porcelain but a painting which was of considerable interest in terms of the history of English porcelain manufacture.

The 2ft 6in x 2ft 1in (76 x 63.5cm) oil on canvas depicts Nicholas Sprimont, the Huguenot silversmith who founded the Chelsea porcelain factory c.1745. He is shown seated with his family (his wife Ann and her sister Susan Protin) surrounded by five examples of Chelsea gold anchor period vases in various stages of completion. Protin hands him an example of one of his completed vases for examination, with other unfinished versions on the table.

Back in 1932 when this painting was sold at auction by Christie’s, it was described as a gentleman, seated at a table holding scales, looking at a lady who holds a vase, a lady in the background, and was ascribed to the artist Zoffany. Purchased at that time by Sir Henry Hughes Stanton Operman and passed down by descent, it was bought in 1994 by Errol Manners and the identity of the sitter was uncovered by John Mallett.

Details of the rediscovery and attribution of the painting (now ascribed to English school, c.1760), as well as dating of the porcelain forms, were published in articles at that time by Mallett who was aided in his detective work by Manners and other experts. From 2004 until this year the portrait was on show at the Mint Museum.

Manners bought the portrait back last month at the Doyle sale for a nearly quadruple-estimate $35,000 (£25,360). The work is important, he told ATG, not just because it is the only known portrait of Sprimont but also because it is the only painting that depicts Chelsea porcelain in the 18th century and (since most of these works are in an undecorated state) to show them in the factory. Belk Gambrell not only purchased the portrait but also acquired examples of the Chelsea vases to match those in the painting. These were offered as four lots in the sale – the most expensive being a pair of pot pourri vases shown above.

The pair of 11¾in (30cm) high mazarine blue ground pot pourri vases were painted with panels of exotic birds which match the single undecorated example shown on the table next to Sprimont’s elbow. This decagonal Meissen bowl of c.1730 painted with a Kakiemon pattern was the most expensive piece from the factory in the Sarah Belk Gambrell collection auction at Doyle where it realised $55,000 (£39,855), over double the estimate.

Last offered at auction at Sotheby’s in 1970, this was formerly in the collection of Thomas Dimsdale (1712-1800), a physician and the author of The Present Method of Inoculating for the Smallpox in 1767.

Invited by Empress Catherine II of Russia to inoculate her son, Grand Duke Paul, and approximately 100 other members of the court, he was rewarded by being made a Baron of the Russian Empire. One of the top-priced lots in the Doyle sale of the Belk Gambrell collection came from the selection of French porcelain in the form of this 8in (20cm) Bleu Lapis ground jardiniere on stand of a form known as Vase Hollandois.

Made c.1754, the model was designed by Jean Claude Duplessis and intended to serve as a vase or jardiniere to grow plants indoors. This example is decorated with panels of exotic birds in landscapes within gilt surrounds and is marked for the painter Etienne Evans (fl.1752-1807).