Brighton-based dealer Patrick Moorhead has consigned a group of works to Christie’s which are being offered in a single-owner online auction this month. Dealer Patrick Moorhead will offer a selection of works at Christie’s.

The 124 lots of furniture and works of art feature a range of periods and styles, and will appear in a timed-online sale that runs until February 25. The overall estimate for the sale is £855,000-1.3m.

Moorhead said: “Buying and selling is in my blood and I can’t live without the thrill of the hunt so I am not planning on retiring anytime soon. I hope that the auction portrays some of the excitement I feel every day for making discoveries and unearthing hidden treasures.

“I have worked with Christie’s for almost 40 years whether it be buying or selling. In many ways an antique dealer and an auction house are vying for the same objective – sourcing the very best pieces to sell.”

During the three coronavirus lockdowns in the UK as well as those overseas, dealers have increasingly turned to auctions as an outlet to sell items. The Moorhead auction follows Christie’s sales of works from London furniture dealer Apter-Fredericks in January which raised £3.4m including premium. The auction house also staged a sale of items from art and design dealer Gordon Watson that totalled £535,750 in November and a dedicated sale of works of art from specialists Finch and Co that generated £409,625 in the same month.

Christie’s also sold a small selection of illuminated manuscripts from Sandra Hindman that raised £85,000 in December. Moorhead is a well-known dealer who grew up in the antiques business. Working with his parents during a time when the network of narrow streets in Brighton known as The Lanes represented the largest antiques hub outside London with over 200 shops, he would help out his father at Attic Antiques and go on buying trips, developing a keen appreciation as he did so.

Having worked at Attic Antiques for two years after leaving school, Moorhead decided to branch out and took over a shop across the road. After expanding the business and opening two more shops, he later took over a vast warehouse converted from a Victorian army drill hall in Brighton’s North Laine area from where he still operates. 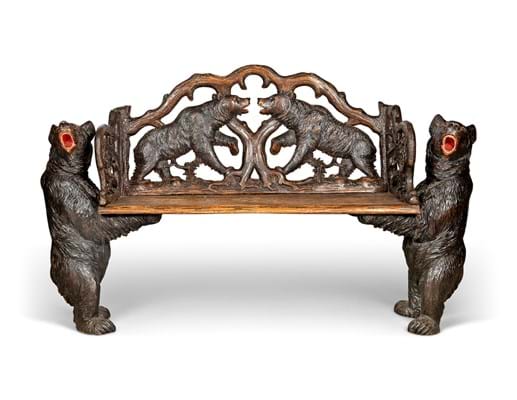 Although selling exclusively to the trade for a number of years, he now sells directly to collectors and interior decorators, including many overseas private clients.

“My intention is for this sale to encompass an array of works, not only to showcase the breadth of my business, but also objects that are important to me,” he said. “Looking at the lots I am also recounting the history of Brighton as well as my background as a dealer via the objects.  As a tribute to my father, I have included a group of oil lamps with pretty glass shades like ones he started off dealing in [lot 104].

“Also included are examples of Chinese ceramics like those at the Brighton Royal Pavilion, alongside Georgian and Regency furniture of the type I could never have afforded when I started out, for example a George III mahogany breakfront bookcase attributed to Mayhew and Ince [estimate £20,000-30,000].

“In this way the auction is a microcosm of my career over 40 years.”