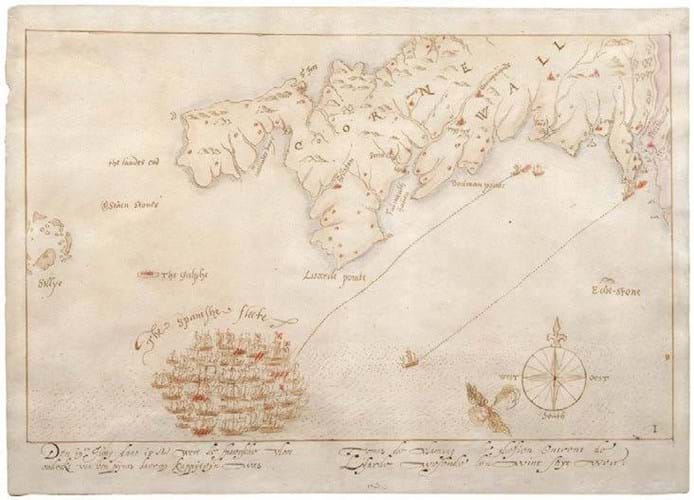 One of the 10 Armada maps acquired after fundraising by the National Museum of the Royal Navy.

Prof Dominic Tweddle, director general at the National Museum of the Royal Navy, said: “I was sitting down for breakfast reading the latest ATG [No 2452] and then spotted the story about the Armada maps.

“I had never heard of these before so I picked up the phone to the team and said I think we need to try to buy these. It was this article that kicked off the fundraising campaign.”

The group of hand-drawn Armada maps depicting a key moment in England’s history have been saved for the nation after the museum raised the £600,000 (plus VAT) needed.

They are the only known contemporary drawings of the defeat of the Spanish fleet in 1588.

The maps had been bought by an overseas buyer from map dealer Daniel Crouch. They were temporarily prevented from being exported last year by the Department for Digital, Culture, Media & Sport (DCMS) on the advice of the Reviewing Committee on the Export of Works of Art and Objects of Cultural Interest (RCEWA) because of their historical importance. One of the 10 Armada maps acquired after fundraising by the National Museum of the Royal Navy.

Tweddle added: “I am glad that ATG featured the story. Like many cultural and heritage institutions, 2020 was an exceptionally tough year for us but we rallied and I am incredibly proud that we have made sure that the Armada maps have been saved for generations to come.

“I would take this opportunity to place on record my gratitude to all those who answered our call to help. It was an amazing response from our funding partners and the public, who dug deep in extremely difficult times, to save these treasures.”

The Portsmouth museum raised the money over two months. A large part was secured via grants from the National Heritage Memorial Fund (£212,800) and the Art Fund (£200,000), with the rest coming from the public.

The museum is seeking further funds to put the maps on display for the first time and has longer term plans for them to tour the country when Covid restrictions permit.

The maps, a complete set drawn by an unknown draughtsman possibly from the Netherlands, are thought to be the earl iest surviving representations of the battle and have not left the UK since they were first drawn in 1589.

The ink and watercolour maps relate to the most famous images of the conflict: a series of engravings completed in 1590 by Augustine Ryther that were based on the original drawings (now lost) made by Surveyor of the Queen’s Works and military engineer Robert Adams (d.1595). It is believed these maps are near-contemporary copies.

Although the early provenance is unknown, the maps were owned by Roger Wilbraham MP (1743-1829) in 1828 and sold by his family at a Sotheby’s sale in 1898 when they were bought by London bookseller J Pearson and Co. They were later sold to William Waldorf Astor (1848-1919) and then inherited by the Waldorf Astor family.