He was “without exception, one of the finest boys I ever met with”, while his “…gallantry can never be exceeded, and each day rivets him stronger to my heart”.

Hoste’s renown clearly resonated with collectors too, as proved when his small Naval Gold Medal for the Battle of Lissa in the Adriatic Sea in 1811 sold for £100,000 at London auction house Morton & Eden (20% buyer’s premium) on July 13.

M&E medal specialist David Kirk said: “We are delighted for the family, and we feel that this result does real justice to what is, without doubt, a superb medal. Captain Sir William Hoste was an extremely important naval figure, as well as being a protégé and friend of Nelson.”

It was part of a collection of family medals that had remained in the collection of Hoste’s descendants until now and made a premium-inclusive £171,960.

Instituted to recognise admirals and captains during the revolutionary and Napoleonic wars, the Naval Gold Medal was awarded for naval victories from 1794-1815. Captains received the smaller version with only up to 100 issued.

The example awarded to Captain (later Vice Admiral) William Bligh of The Bounty fame in 1797 for the defeat of the Dutch fleet at Camperdown sold on estimate at Melbourne, Australia, saleroom Noble Numismatics for Aus$200,000 (£120,000) in July 2011. 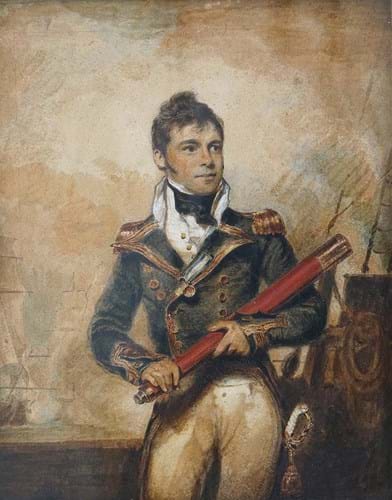 Hoste’s Royal Navy career began with an introduction, engineered by his father, to Horatio Nelson and the role of captain’s servant aboard the newly refitted HMS Agamemnon.

He was by Nelson’s side from 1793-98 and present at both the Battle of St Vincent and the Battle of the Nile. Hoste rose swiftly to the rank of captain and would go on to become, in his own right, one of the great frigate captains of the Napoleonic Wars.

However, he would miss the great sea battle of Trafalgar while delivering diplomatic gifts and messages to the Dey of Algiers. On hearing of his mentor’s death, Hoste wrote to his father: “Not to have been in this battle is enough to make one mad; but to have lost such a friend besides is really sufficient to almost overwhelm me…”

In Hoste’s finest hour, during the opening stages of the Battle of Lissa (the island today known as Vis in the Adriatic Sea) on March 13, 1811, he raised the signal ‘Remember Nelson’ from HMS Amphion in honour of his friend. Met with loud cheers, he then led his ships in a devastating attack on the larger French and Venetian squadron.

Hoste’s first son, Rear-Admiral Sir William Legge Hoste, would go on to serve with distinction in the Royal Navy (his pair for the Second China War, 1857-60, sold for a within-estimate £3800) while the Great War medals and memorial plaque given to the last member of the family to bear the names sold for £5000 (estimate £400-600).

Lt Sir William Graham was killed in action on May 9, 1915, aged 20, in France, while serving in the 2nd Battalion, Rifle Brigade.