After a difficult period because of the pandemic, the latest round of Old Master sales in London returned to some kind of normality. 'The Music Lesson' by Frans van Mieris the Elder – £2.9m at Christie’s.

However, activity in the sector still seems to be suffering from what might be described as the art market equivalent of ‘long Covid’, not least due to ongoing restrictions in terms of travel and the holding of live viewings and events.

The sales in London in early July had a smattering of room bidders who were able to participate, but the auctions themselves lacked the sense of occasion traditionally generated at these summer flagship sales.

Fewer people could attend the pre-sale viewings and, in a market where physical inspection is paramount (despite admitted improvements to the salerooms’ condition reports), this clearly had a significant impact. The dearth of visitors to London from Europe, the US and Asia this summer, as well as dealers being less inclined to stock up due to the lack of fairs and other selling opportunities, also combined to have a dampening effect.

With all this considered, the overall premium-inclusive total of just over £80m from the sales at Sotheby’s, Christie’s and Bonhams looked better than may have been expected. Comparisons with last year are difficult due to the calendar being changed back then in favour of mixed-category sales, but the approximate total for Old Masters sold in summer 2020 was around £50m-60m. More comparable is the total for the year before that, July 2019, where the turnover was £98.1m.

It could be said therefore that supply and demand has markedly improved since the nadir just over a year ago, but remains shy of pre-pandemic levels.

At the time this summer’s sales took place, however, people seemed generally confident that the market would not only come through the coronavirus intact but also that decent Old Masters would continue to hold their value relatively well.

A number of works that sparked interest at the current series underlined how high-quality or rare Old Masters are still regarded as sound investments, especially at Christie’s (25/20/14.5% buyer’s premium) which had the best-performing evening sale this time round.

Lively action came for a rare painting by Frans van Mieris the Elder (1631-85).

Works by the artist do not appear regularly on the market but Christie’s sold one titled The Drummer Boy back in December for £1.45m. At the latest Old Master evening sale on July 8, another finely painted figurative work, The Music Lesson, emerged from a private British collection where it had remained untouched for almost a century.

Typically small, the 12 x 9½in (31 x 24cm) oil on panel was an intimate depiction of the artist and his wife, and was thought to date from c.1660, three years after the couple had married. The catalogue mentioned how the work seemed to trumpet their social status with the artist showing himself holding a violin (music and dance was a mark of an upper-class education at the time) and his wife was elegantly dressed in fine clothing and sported a large mouche (beauty spot) to her forehead.

While the painting originally had an arched top, the panel had been altered with extra sections to create a rectangular format. Some speculation surrounded whether the artist himself added these sections or whether they were later additions. However, recent evidence pointing towards van Mieris himself making these changes was referred to in the catalogue (dendrochronological examination of the original panel was available on request).

In any case, this was seemingly the first time a work with a self-portrait of the artist had emerged at auction, making it a significant work academically and an attractive rarity commercially.

With the £700,000-1m estimate not regarded as excessive, especially following the price for The Drummer Boy, the good pre-sale interest in the work translated into lively bidding on the night. It was knocked down to a phone bidder at £2.9m, the second-highest auction price for the Leiden painter – not far behind the £3.2m for Young woman in a red jacket feeding a parrot that sold at Sotheby’s in December 2008. These included the highest price for Georges de la Tour (1593-1652) when Saint Andrew sold at £3.7m. Although this was below the £4m-6m estimate, it surpassed the €3.6m (£3.27m) previous high which was set at Lempertz in December for La Fillette au Braisier (Girl Blowing on a Brazier) – a sum that had seemingly pushed up expectations of the current picture at Christie’s. The work at Lempertz, reported in ATG No 2472, has since entered the collection of the Louvre Abu Dhabi, meaning even fewer works by the artist now remain in private hands.

Indeed, only around 50 pictures in all are known by the great French Baroque painter and, other than the Lempertz picture, none had emerged at auction since 2008 when Saint James the Greater made $3.23m (including premium) at Sotheby’s in New York. View of Verona with the Ponte delle Navi by Bernardo Bellotto – £9m at Christie’s.

Similarly, the sale’s big-ticket lot, a view of Verona by Bernardo Bellotto (1721-80), sold below estimate but posted an artist’s record and made a major return on its last auction appearance. The 4ft 5in x 7ft 9in (1.33 x 2.35m) oil on canvas from 1745-47 had previously sold for £300,000 at Christie’s back in 1971, before then being acquired by member of the vendor’s family from dealer Cyril Humphris.

Humphris arranged the work to be loaned to the National Gallery of Scotland where it was hung from 1973 until earlier this year.

While it was clearly a major work by Canaletto’s nephew and works of this scale are rarely available, the £12m-18m estimate nevertheless looked punchy. It was knocked down at £9m on the phone.

While it may not have generated the same national headlines as the record Leonardo da Vinci drawing sold for £7.5m at Christie’s earlier the same day (see ATG No 2501), it was still the top lot of the week.

One of eight estuaries 'Purfleet and the Essex Shore as seen from Long Reach' by JMW Turner – £4m at Sotheby’s.

While the 2ft 11in x 3ft 11in (90cm x 1.2m) oil on canvas may not have had the same commercial appeal of Turner’s romantic landscapes or late impressionistic pictures (which can command £10m-plus), any work by the artist is a valuable proposition, especially one of this size and market freshness.

Offered with a £4m-6m estimate, it sold at £4m to a phone bidder. Although the auction house was no doubt hoping the bidding would advance further into the estimate, the price still ranked in the top 10 prices for Turner at auction and was the highest so far for a conventional marine scene. 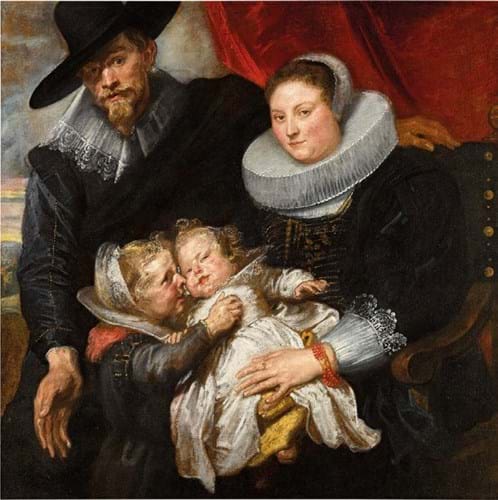 Family portrait of the painter Cornelis de Vos and his wife Suzanna Cock and their two eldest children by Sir Anthony van Dyck – £2m at Sotheby’s.

Drawing more interest was a work by another major name, a family portrait by Sir Anthony van Dyck (1599-1641).

Depicting fellow painter Cornelis de Vos, his wife Suzanna Cock and their two eldest children, the 3ft 10in x 3ft 8in (1.17 x 1.11m) oil on canvas had been part of the Cook family collection and kept at Doughty House in Richmond for many years before it was bought by art dealer Nathan Katz in the late 1930s. Based in The Netherlands, the Jewish art dealer was forced to sell the work through an intermediary to Hermann Goering in 1941.

It was later recovered by the ‘Monuments Men’ at the end of the Second World War and was restituted to the Katz family in 1948. Here it came to auction from a private collection in Jersey.

An early work painted when van Dyck was around 20 years old, it was admired for its rapid and bold brushstrokes as well as being finely preserved. The Sotheby’s condition report (written by an external specialist) stated that the paint layer was ‘stable and secure and the vigorous and energetic method of paint application is apparent’.

An attractive subject to boot, two phone bidders pushed the price beyond the £1m-1.5m estimate before it sold at £2m – again a sum firmly within the artist’s top 10 auction prices. While the sale was generally hard going for Netherlandish paintings – with an early flower picture by Jan Brueghel the Elder (1568-1625) failing to sell against a £2.5m-3.5m estimate and seven of the 11 works from the Schuybroek collection also left unsold – a lavish still-life by Willem Kalf (1619-93) met with a better response.

The 3ft 4in x 2ft (1m x 83cm) signed oil on canvas was an elaborate, richly coloured, expertly lit and mature work by the Rotterdam-born artist depicting a Chinese ginger jar, silver, a cut melon, bread, a porcelain bowl and a pink rose, all on a table draped with a Persian carpet.

It was in fact one of three near-identical paintings featuring this composition with the other two now in museums - one in the Musée de Picardie in Amiens and the other painting in the Stedelijk Museum Het Prinsenhof, Delft.

This example had been in the vendor’s family for over a century (although was unsold at Christie’s back in 1935) and was in an excellent state of perseveration. Works on this scale and in such appealing condition are not often available at auction and, estimated at £800,000-1.2m, it was knocked down at the top end of predictions to another phone bidder.

The price was the second highest for Kalf, only behind another similarly sized still-life from the Shickman collection that sold for $2.3m (£1.76m) at Christie’s New York in May 2019.

Other northern European pictures that put in a notable performance included a winter landscape by Jan Griffier the Elder (c.1645-1718) which doubled its low estimate at £200,000, setting an auction record for the Dutch Golden Age painter, and an early 16th century portrait of a fool attributed to Flemish artist Quinten Massys (1466-1530) which was probably the most eye-catching lot of the night. Titled A jester: a grotesque head of a fool brandishing a wooden spoon, it had been part of a French aristocratic collection until it was acquired by the vendor from Christie’s New York in October 2017. Back then it was catalogued as simply ‘Flemish School, 16th century)’ and sold for $47,500 (£35,770) including premium against a $20,000-30,000 estimate.

The 10 x 7½in (25 x 19cm) oil on paper laid on panel had since been cleaned and had later additions removed. Research had pointed to Massys as the likely candidate both on stylistic grounds and the fact that he had experimented in small character studies during the final decades of his career when he was running a large workshop with son Jan.

Two related works of similar size were identified: one now at the Yale University Art Gallery depicting a corpulent man with a bagpipes and another in The Phoebus Foundation, Antwerp, of a toothless wrinkled old woman.

The jester’s clothes and asses ears sewn to the cap of the cloak implied the sitter in the current work was a professional fool (still commonly found in the early 16th century at carnivals and courtly events).

The striking image, unusual subject and sense of rediscovery, not to mention the fact that original works by Massys rarely appear in any case, lent it significant appeal and against a fairly cautious £40,000-60,000 estimate, it drew five keen bidders at the auction.

After a strenuous battle, it was knocked down at £420,000 – an 11-fold return for the vendor since it was bought three-and-a-half years before, and a sum that also continued the strong run of prices over recent years for Old Masters with curious or quirky subjects.

The result was another indication that the sector still has its rewards, as long as you have an eye for an opportunity and know what you’re doing.

Portrait of a Grand Tourist turns heads at Bonhams