He’s not the retiring sort: Jeremy Lamond looks forward to Woolley & Wallis back in auction action In September 2019, just after auctioneer Jeremy Lamond had announced his decision to leave Shrewsbury after 23 years at Halls, he had been surprised to read in the Shropshire Star newspaper that he had chosen to retire.

In fact, as reported in ATG, Lamond was simply relocating to the south west where his wife is a professor at the University of the West of England in Bristol – and had soon afterwards agreed to join Woolley & Wallis as head of the valuations department and associate director.

He officially started his new role in June, since which time he has moved to Bath, been furloughed, enjoyed four hectic months of feet-finding, been furloughed again (this time on a flexible basis), serviced a new valuations page on the company website and latterly bought a house in Salisbury, just 10 minutes’ walk from the Castle Street saleroom.

So just how is that retirement going, Jeremy?

Although surrounded by packing boxes and rather too many reference books – and still a little unsure of the local geography as he covers 400 miles a week – he declares he is “loving the role”.

Back at his desk for the first time since January, he says “it has been absolutely marvellous”.

Full of praise for his colleagues (“Woolley & Wallis has invested heavily in expertise and the strength in depth here is the difference”), he is also enjoying the relatively rich pickings of his new patch.

“There are a lot more chimney pots here, and lots more auctioneers competing for the business, of course, but I have hit the ground running and began finding good things immediately.” Some of those items – five of them pictured here – form part of a bumper season of selling from Salisbury’s finest that begins this week with Furniture, Works of Art and Clocks (April 20-21) and continues with specialist sales deep into the summer. 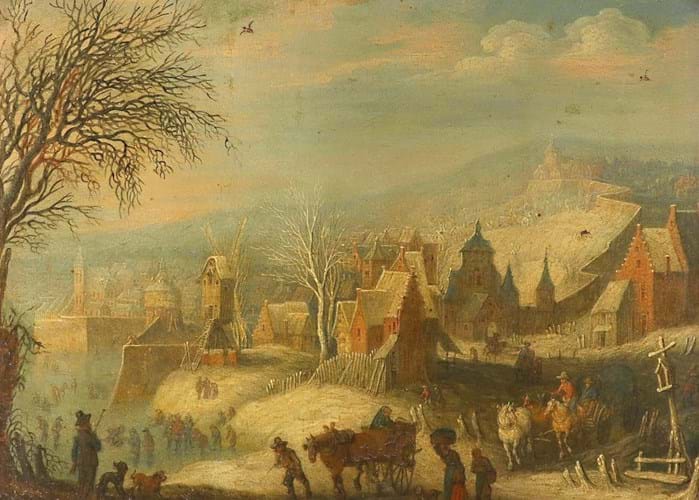 Oil on copper of a winter townscape by Joseph van Bredael (Antwerp 1688-1739 Paris) spotted hanging in a corridor. Estimate £8000-12,000 at the August 11 sale of Old Masters, British and European Paintings at Woolley & Wallis.

Lots in the pipeline

The firm’s newly published calendar has 16 auctions planned from now until late August, plus “some great things in the pipeline” as the firm catches up with a backlog of probate work.

Scheduled for sale in the autumn (November 10) is the Micheàl and Elizabeth Feller collection, a Cotswolds consignment of early oak, delft, treen and textiles from a couple who made a £500,000 donation of English needlework to the Ashmolean Museum in 2014. For a number of reasons – not least the tragic loss of a much-valued member of staff to Covid in December – Woolley & Wallis chose to cease selling throughout all lockdown restrictions.

But the good news is the storerooms are full, the doors are open once more (by appointment)… and the head of the valuations department has not retired.

Varied selection from execution to excise in Exeter saleroom