A note penned in December 1963 by Mary Elizabeth Smith from The Mendips, Menlove Avenue, Liverpool, to a Miss V Stoker of 54 Pirton Road, Hitchin, sold for £1300 to a UK online bidder at Wolverhampton saleroom Cuttlestones (17.5% buyer’s premium) on March 19. 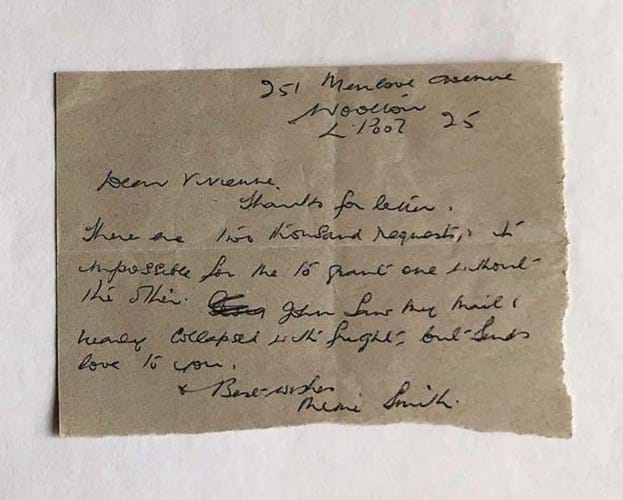 Note from Aunt Mimi on behalf of John Lennon - £1300 at Cuttlestones.

The price is better explained by the identity of Smith: she was known as Aunt Mimi and the address was the childhood home of her nephew John Lennon. She sent the note to Stoker, a Beatles fan, and it dates from the moment of the Fab Four’s spectacular rise.

Deluged with similar requests, Aunt Mimi was unable to grant a request for Lennon’s autograph. Note from Aunt Mimi on behalf of John Lennon - £1300 at Cuttlestones.

The note reads: “Dear Vivienne. Thanks for letter. There are two thousand requests, it’s impossible for me to grant one without the other. John saw my mail & nearly collapsed with fright, but sends love to you, Best Wishes Mimi Smith.”

It was consigned to the Wolverhampton saleroom by the original recipient, who rediscovered the note during a lockdown clear-out. The estimate was £200-400.

Original scripts for The Archers come to auction