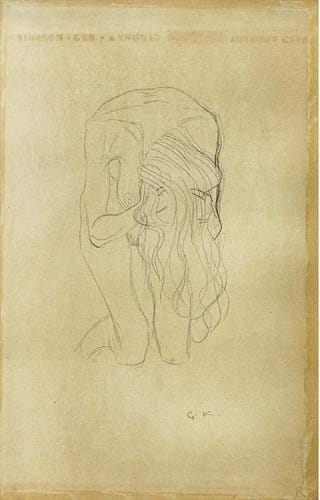 ‘Kneeling female nude’, a sketch by Gustav Klimt for the Beethoven Frieze – £32,000 at Chiswick Auctions.

The black chalk sketch on buff paper was one of many studies the artist made for the Beethoven Frieze, a monumental work Klimt painted directly on the walls in the Secession Building in Vienna.

The 19 x 12½in (49 x 32cm) drawing depicting a female nude in the throes of despair was signed with the artist’s initials and also included the ownership initial for the industrialist Carl Reininghaus (1857-1929).

A key patron in his early career, Reininghaus acquired Klimt’s finished Beethoven Frieze together with related sketches for the project following its exhibition to save it from destruction.

Klimt scholar Alice Strobl believed this drawing was a study for Nagender Kummer (gnawing grief) in the frieze. However, fellow expert Dr Marian Bisanz-Prakken, who helped the auction house with the catalogue entry, identified it as part of a figure group called Die Leiden der schwachen Menschheit (The suffering of weak humanity). Klimt, after developing his ideas, eventually chose to omit this from the finished composition.

The drawing last appeared at auction at Sotheby Parke Bernet in New York in May 1979 where it was purchased by the parents of the vendor.