The firebreakers, circuitbreakers, alerts and tiers have made recent weeks feel chaotic. But dealers are carrying on regardless, devising new and different ways to sell their stock safely, whether online, through catalogues or in person. Here we look at four businesses, each using a slightly different method to get their best and freshest stock out to eager clients.

Prompted by the loss of many London and UK antiques fairs this year – and, by the looks of things, in 2021 too – European glass and tile specialist Richard Hoppé has taken matters into his own hands.

“I usually keep quite a few new pieces of stock for first-time outings at fairs before they go on the website,” he says. “With so many cancellations I have a rather large inventory, and instead of simply uploading everything and sending out an announcement email, I got to thinking, ‘how could I make an event out of this’?”

His solution was to launch an Armchair Antiques Fair on his website, which is essentially a digital recreation of his stand as it would have been at various events.

Though he has tried to give the event a homely feel with its title (using ‘armchair’ rather than more “sterile” options such as ‘digital’ or ‘virtual’), he approaches the event as he would any other fair with print and email invitations. It runs from October 30-November 16 on Hoppé’s website. Meanwhile, he continues his Instagram series Take a Look, which features 60-second video clips of him speaking on various antiques related themes.

The plate was one of 12 submitted by the Rockingham factory to King William IV in 1830 as sample designs for a royal dessert service. Painted by Charles Speight, the example in question features a scene from Sir Walter Scott’s 1816 The Antiquary in a gilt roundel and an oak leaf and acorn border surmounted by the Royal Arms. 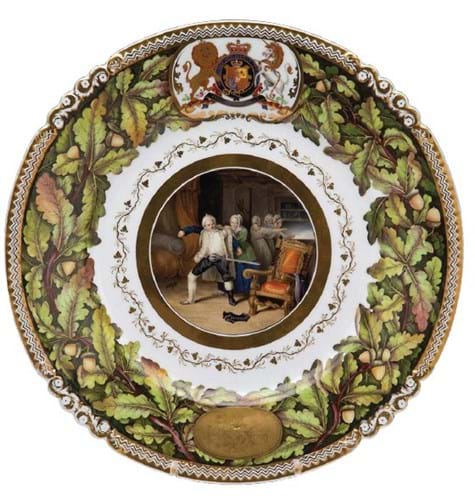 This Rockingham Royal Service sample plate is part of Albert Amor’s catalogue of works from The Coldwell Collection, where it is offered for £3800.

The Antiquary, the third of Scott’s Waverley novels and said to be the author’s favourite of his own works, tells the story of an amateur historian and collector of dubious antiques. Measuring 9½in (24cm) in diameter, the plate has a printed griffin mark in puce and is offered for £3800.

Ultimately the king chose a light matt blue ground for the service, but due to the complexity of the order it was not delivered until May 1837 and was first used for the coronation of Queen Victoria. So great was the cost of producing the chosen service that the Rockingham factory had to borrow from their patron Earl Fitzwilliam to complete the order.

The Coldwell Collection features pieces ranging from the 1780s-1950s and is the result of a 25-year collaboration between a collector and dealer Mark Law.

As well as the 128 pieces in the catalogue, another 200 will appear on the gallery website.

Objects are also available to view at the gallery by appointment.

3. Online and in the showroom – Lennox Cato Antiques & Works of Art

Another dealership taking to the internet in light of lost fairs is Lennox Cato of Edenbridge. Its autumn selling exhibition It’s all in the Detail is available both online and by appointment at the Kent showroom, with a catalogue available digitally or in hard copy by request. Lennox Cato offers this 18th century mahogany linen press attributed to Chippendale for a price in excess of £20,000 at the autumn exhibition It’s all in the Detail.

To enhance the exhibition, Cato will present a number of videos on his YouTube channel and take part in live Instagram videos.

Dealers Richard Turkington of Fifties Art and Neil Schofield of Modern British Art hatched a plan to stage a joint show while exhibiting at the Connect Art Fair in January. After being postponed twice, the exhibition is now under way at Elmslie House in Great Malvern. Titled Modern British Art: New Ways of Seeing, it features Abstract and representational art from the post-war period, including paintings, sculpture, limited-edition prints and a selection of artist-illustrated and signed books. Wilhemina Barns-Graham, Mary Fedden and Barbara Hepworth are among the featured artists.

The show is available to view individually or for single households or bubbles in pre-booked half-hour slots.

Themes and Variations on a Rondo Veneziano