More than 700 lots of Decorative Arts and Design spanning the 19th through to the early years of this century were offered for sale by Woolley & Wallis (25/12% buyer’s premium) in Salisbury over two days. The first day’s Arts & Crafts auction on October 6 was given over to the earlier material largely spanning the later years of the 19th through to the early 20th century.

The second day’s Design sale covered material from the inter- and post-war eras. In both cases this took in a wide variety of categories with plenty of ceramics and metalwares, furniture, textiles and jewellery, sculpture, graphics and more. Both sessions included a number of single-owner collections of varying sizes.

The highest overall price was paid for a Martinware bird from the 23-lot section devoted to late 19th century art pottery by the three brothers.

This particular 12¼in (31cm) high example, by Robert Wallace Martin, was incised Martin Bros London & Southall 2-1893 to the head and base, and realised a mid-estimate price of £26,000.

Plenty of interest emerged for the preceding lot, an 8in (19cm) high ovoid vase by Edwin and Walter Martin decorated with two dragons fighting a serpent and incised 9-1894 Martin Bros London & Southall.

A piece that was formerly part of the extensive John Scott collection of decorative arts, sold by the Fine Art Society in 2014, it doubled the estimate to take £9000.

A selection of William de Morgan pottery encompassing hollow-wares, individual tiles and tile panels included a 10¼in (26cm) high ruby lustred vase of double gourd shape decorated with birds, some with snakes in their beaks, among scrolling foliage, which sold for £7500.

An animal lustre tile, that was a flea market find earlier this year, is pictured this week in Fairs, Markets & Centres.

A small group of pieces from the Birkenhead-based Della Robbia factory featured a 21 x 9in (54 x 22cm) wooden framed plaque designed by Edward Coley Burne Jones and made by Harold Rathbone, Annie Walker and Lizzie Wilkins.

It was incised to the front Della Robbia Ist Day of Creation after E Burne Jones and monogrammed HR, while to the reverse was an impressed mark and a Home Arts and Industries Association exhibition label. It sold for a low-estimate £4000.

From the same pottery came Melody, a similar sized 19 x 11½in (48 x 29cm) tile plaque with a low relief scene of children playing musical instruments designed and made by Ellen Mary Rope. It was signed Rope in the bottom left corner and despite being repaired realised £1000 – double the £300-500 top guide. Guild of Handicrafts box by CR Ashbee and Arthur Cameron – £3800 at Woolley & Wallis.

The metalwares produced two notable results for boxes; one British, the other Austrian. The British piece was a 7 x 4in (18 x 11cm) Guild of Handicrafts copper and enamelled box c.1890. It was the work of Charles Robert Ashbee and Arthur Cameron who made the inset panel decorated with a figure of a standing rhinoceros based on the famous engraving by Durer.

This had a provenance to some well-known names in the decorative arts field: Charles and Lavinia Handley Read, John Jesse and Andrew McIntosh Patrick. It sold for £3800.

The Austrian piece in silver gilt was from the Wiener Werkstätte. It was made by Eduard Josef Wimmer Wisgrill and inscribed 8 December 1911 inside the cover, which was inset with an ivory panel painted with a half-length figure of St Nicholas. The 5in (13cm) box also bore Wiener Werkstätte marks and the artist’s monogram to the base. It ended up selling for £10,000, comfortably over the £3000-5000 guide. 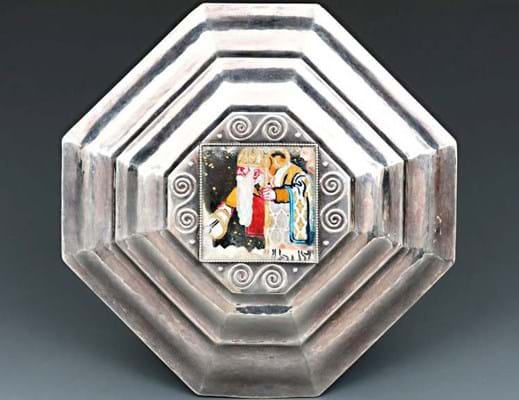 A large oak panelled door fitted with polished steel furniture was another of the first day’s top prices.

It had been designed by Sir Edwin Lutyens for the interior of Little Thakeham in West Sussex, a Lutyens commission from 1902 and was previously under the hammer as part of the Country House sale of Little Thakeham held by Rupert Toovey in 2000. Here, estimated at £1000-1500, it ended up selling for £11,000.

The Design sale the next day opened with a selection of inter-war glass, much of it of Continental manufacture. The top price in this section at £7000 was a large 2ft 1in (67cm) lamp by Daum in acid etched amber glass with a pronounced mushroom-shaped shade.

The highest prices on the second day were provided by two lots of Fairyland lustre designed by Daisy Makeig-Jones for Wedgwood in the inter-war period. Both were part of a 15-lot consignment with a provenance to Makeig-Jones’ family (the same source from which pieces were also offered in these rooms last year). All bar two changed hands.

A 7¼in (18.5cm) high malfrey pot and cover in the Bubbles II pattern decorated to the exterior with a spider, and to the interior with four elves, was similarly sought after, selling for £9500 against a guide for £2000-4000. Two single-owner collections of sculpture were also offered in the sale. One of them, the collection and old stock from the owner of the Armstrong-Davis Gallery in Arundel, included a bronze of a First World War soldier by William McMillan RA (1887-1977). His oeuvre includes a number of war memorials.

The 10in (25cm) high figure with an ‘indistinct signature in cast’ depicted a resting infantryman. The £500-800 estimate was low, said Woolley & Wallis’ head of design Michael Jeffrey, who had hoped it would do better. It ended up selling for £7000 to an Art Nouveau and Arts & Crafts collector.

The most expensive of nine works on paper by the German artist and illustrator Dorte Clara Dodo Burgner (1907-98) – a regular feature in these sales – was a gouache and pencil cover design for Ulk magazine.