A number of strong results for works by modern Vietnamese painters have been achieved in recent weeks in salerooms across France. As a former colony, when Vietnam was part of French Indochina prior to its independence in 1945, there have been close historical connections between the two countries, reflected in the artistic legacy.

Some of these artists either visited or became resident in France and their works were also purchased and brought back by French expatriates.

One key event was the auction billed as Painters of Asia – Major Works held in Neuilly on October 6 by Aguttes (25/23% buyer’s premium) which has a long tradition of specialist sales in this field.

It was devoted almost entirely to paintings by 20th century Vietnamese artists, in particular those from the Ecole des Beaux Arts de l’Indochine. This was established by the French colonial government in Hanoi in 1925 and was responsible for creating a style and school of modern Vietnamese painting that mixed Western and Eastern techniques and styles.

The 33-lot auction generated keen interest from would-be buyers in the room and absentee bidders on the phones and internet.

A two hour-long session, which generated a number of bidding battles, raised a premium-inclusive total of €3.78m.

Topping the bill at €910,000 (£827,730) was the catalogue cover lot, Le Pho’s Jeune fille aux pivoines, which is signed upper left and was painted c.1945 when the artist had already moved to France to settle permanently.

The 3ft x 2ft 4in (91 x 71cm) portrait of a young woman seated at a small table in front of a massive bouquet of peonies and other flowers was painted in a Western style but, like many traditional Vietnamese paintings, was executed on silk.

It had a c.1950 provenance to the Galerie Romanet from where it was acquired for a Parisian private collection. The price is the second highest recorded at auction for the artist.

The most expensive of seven paintings by Mai Trung Thu included in the auction was his rectangular format painting in ink and colours on silk from 1960 showing two young boys playing a board game – a typical everyday scene from Vietnamese life of the type favoured by the artist.

The 9¼in x 3ft 4in (23.5cm x 1m) work, which is was signed and dated lower left, has the bonus of being in its original frame which was made by the artist. Offered from a private collection in Cannes having been acquired in the early 1960s from a Paris gallery, it made over three times the pre-sale estimate at €170,000 (£154,545).

A work by another alumnus of the Ecole des Beaux Arts de l’Indochine was the highlight of a much bigger and broader 364-lot mix of paintings, photographs, books, manuscripts and other works from Indochina held at the Drouot auction centre by Lynda Trouvé (28% buyer’s premium inc VAT) on September 22.

It is one of three known versions of this subject by the artist, another of which is displayed in the Vietnam Museum of Fine Arts in Hanoi and, says the auction house, is the only one to retain all the original panels.

The painting came with a primary provenance. It was purchased during the annual exhibition of the Ecole des Beaux Arts de l’Indochine by a former doctor-surgeon working at the Haïphong hospital from 1928-47, and had remained since then in the family.

A second smaller panel painting in lacquer, this one by Pham Hau (1903-95), was the object of similarly keen attention when it went under the hammer in a sale at Drouot held by Coutau-Bégarie (24% buyer’s premium) on October 6. 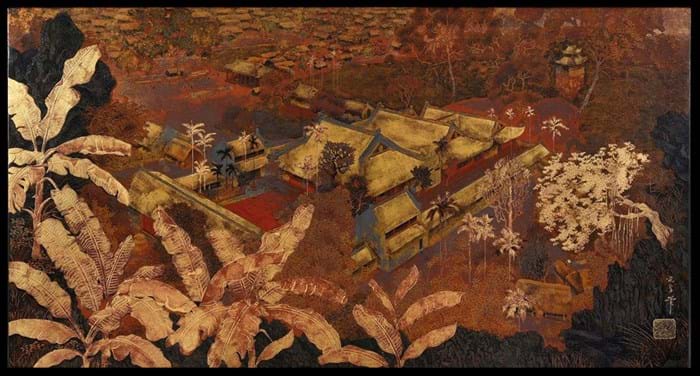 Like Nguyen Van Ty’s painting sold the month before, this had a good private, market-fresh provenance. It belonged to the son of a former director of the Ecole Professionnelle de Hanoi who acquired works by Pham Hau directly from the artist in 1939 or 1940 from an exhibition organised by the Ecole des Beaux Arts de l’Indochine. The family returned to Paris after 1945 and the painting had remained in Paris since 1946. Beyond Paris, another work by Mai Trung Thu appeared in a mixed-discipline sale held by Ivoire Nantes (24% buyer’s premium inc VAT) on September 29.