Roma Numismatics set a new record for a classical coin when a Brutus Eid Mar-type gold aureus, struck shortly after the murder of Julius Caesar, took £2.7m in London. 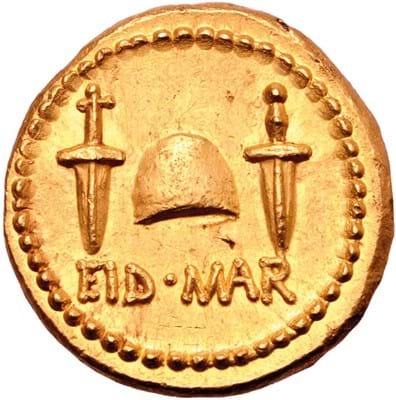 Until recently it was thought that the coins in the British Museum and the Deutsche Bundesbank collection were the only two surviving gold examples of this famous issue.

Made by a military mint travelling with Brutus during the late summer or autumn of 42BC, the coin has long fascinated both numismatists and historians. It is best known from around 80 surviving silver denarii.

The simple reverse design contains the three principal elements used to kill a dictator – the pileus or cap of liberty and two daggers of differing design, one symbolising that wielded by Brutus himself on March 15, 44BC, the other that of Cassius, his co-conspirator. The legend Eid Mar abbreviates Eidibus Martiis – the Ides of March.

“Nothing resonates so deeply with those knowledgeable in ancient Roman coinage as the dramatic Eid Mar type,” stated Roma’s catalogue. “In an act of unparalleled braggadocio, we are at once presented with the murder weapons used to slay Caesar, the precise date of the deed and the motive.”

The inclusion of a portrait on the coin was an equally bold move. It was Caesar who, as dictator perpetuo, had been granted the honour of striking coins bearing his own likeness, thus breaking the ancient taboo of placing the face of a living Roman upon a coin.

This new discovery, described as being in a near mint state with marks that occupy “a logical but previously unrepresented stage in the diestate progression”, has a 19th century Swiss provenance.

It had descended in the family of the antiquarian Baron Gustave Charles Ferdinand von Bonstetten (1816-92), whose collection formed the basis of the Bernisches Historisches Museum.

The anonymous winning bidder at the auction on October 29 paid more than five times the top estimate and around £3.25m with the 20% premium added.

The previous record for a classical coin was a Pantikapaion ‘satyr head’ gold stater sold for $3.25m (£2.3m) at the Prospero sale in New York in 2012. The previous high for a Roman coin was set at Numismatica Genevensis in 2008 by a SFr2m Hadrianic bronze sestertius c.135-36AD.