Slimline sale in Cheffins still one to remember 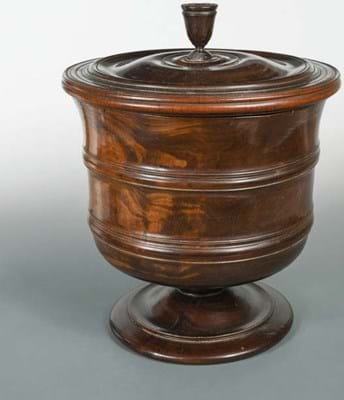 Making his debut at Cheffins (22.5% buyer’s premium), auctioneer Nicolas Martineau had just over three hours on the Cambridge rostrum instead of the traditional two days for an autumn ‘fine’ sale. Covid-19 had interrupted the supply of new lots.

However, with a £746,000 hammer total the slimline 154-lot event on October 1 ensured a memorable start. “There was real quality to everything on offer and a real appetite for it from both the trade and private buyers,” said Martineau.

The 64 paintings dominated the sale (see Art Market, ATG No 2466). Elsewhere, Continental furniture took top honours and it was notable to see the UK trade taking the best on offer time and again rather than fill the role of underbidder to private buyers.

A brêche marble-topped Louis XV tulipwood and marquetry secretaire cabinet led the field. The 3ft 9in (1.15m) tall cabinet with an arrangement of drawers and secret drawers behind the tambour doors had some condition issues. However, it excited French interest pushing the final bid from an English dealer to £19,000.

A bigger surprise was the interest in a late 17th century Italian table. Lacking its central stretcher, the 8ft 8in (2.63m) long walnut top now stood on a trestle, although the table’s baroque wooden supports carved with grotesque masks, mermaids and flowers did come with the lot. Martineau thought it was the superb quality of the top which prompted bids until to a five-times-top-estimate £10,000 from the UK trade.

The best-seller among the English furniture was less of a surprise. This was a George III caddy-topped mahogany chest with brushing slide and four drawers. Measuring 2ft 7in x 2ft 10in (78 x 87cm), it was a fine-looking piece and late in the day a maker’s label was discovered for Giles Grendey, St John’s Square, London. Grendey (1693-1780) was one of the foremost makers of the age, working in Clerkenwell from 1731 until at least 1755.

The information, along with minor condition problems such as loss of veneers, was included in the catalogue but the vendor was happy to stick to the original estimate of £700-1000. The chest sold to a UK dealer at £6500.

A UK dealer also took the ceramics prize, more than doubling the top estimate to do so. Much more of a dark horse was a 15in (38.5cm) prancing bronze version on a wooden plinth with boulle work panels. Briefly catalogued as ‘probably 18th century’ and estimated at £300- 600, it sold to the trade at £6500. A late 17th century date was likely.

Best of the bronzes was After the Wolf Hunt catalogued as after Nikolaï Ivanovich Lieberich (1828-83), whose figures of bears and hunting scenes remain highly popular in his native Russia and in the US. It was signed Lieberich and inscribed Fabr.C.F.Woerffel/ St Petersbourg for his favoured foundry.

At Cheffins, Russian bidders quickly passed the £2000-3000 estimate and the bronze sold to one of them at £14,000 via thesaleroom.com.

Transmuting base metal into gold with less intervening artistic work was a lead water cistern initialled VIM and dated 1727. Measuring 2ft 6in x 3ft 7in x 21in (76cm x 1.1m x 53cm), it was decorated with shells, geometric panels and baroque cartouches.

Among the smalls, two lignum vitae items and a late 19th century game stood out.

A c.1680, 16½in (42cm) tall wassail bowl and cover had some splits and small areas of losses to the rim and finial but more than doubled top expectations.

A fairly rare victory for the private buyers, it sold online to a collector at £5500.

The trade was back in action to secure a matched pair of late 17th century tazze. Standing about 13in (33cm) and featuring engine ring-turned and chip carved decoration, they also had minor condition problems but tripled top hopes at £4600. The late Victorian board game was one of those items which catch the eye when clearing a country house and had that equestrian theme which was popular at Cambridge.

Merry’s Game of the Race comprised a set of 12 painted lead horses with jockeys, two leather dice shakers, two dice and original printed sheet of the rules in a 9¼ x 6in (23.5 x 15cm) mahogany box.

It lacked its board but was otherwise in good general condition and, against a £100-200 estimate, came in at £2200, selling to a private buyer.