Specialist auction house sells early versions hailing from the US The Sholes & Glidden was not the world’s first typewriter, but it was the first successful commercial example.

Principally the work of US inventor Christopher Lathan Sholes, it was developed with the assistance of fellow printer Samuel Soule and amateur mechanic Carlos Glidden.

The New York firm Remington, an arms manufacturer seeking to diversify, acquired the patent in early 1873 and put it into production the following year.

The machine incorporates elements which became fundamental to typewriter design, including a cylindrical platen (roller) and the four-rowed Qwerty keyboard that remains the norm today.

Visually it owes much to sewing machines of the period, including a japanned case with floral and portrait vignettes and a cast-iron stand with a treadle to operate the carriage return.

The first model had its flaws (it could print only upper-case letters) and was very expensive at $125 but these issues were remedied in its later and cheaper successors. More than 5000 Sholes & Glidden or Remington No 1 typewriters were sold, with over 1000 units made in 1874 alone.

An example of the Remington No 1, described by Cologne technology specialist auction house Auction Team Breker (21.8% buyer’s premium) as ‘a milestone in the history of the office equipment industry’, had the serial number A901, dating it to 1873.

The Sholes & Glidden typewriter is hugely desirable on account of its historical importance, but it survives in greater numbers than some of the other rarities offered in the Breker sale of Office Antiques.

One of the rarest of all typewriters is the Cash Typograph made by The Typograph Company of Hartford, Connecticut, in 1888.

It has a full-sized paper flat platen that moves left-to-right and back-and-forth. The four-row keyboard has capitals only. The patent relating to the machine was filed by Arthur Wise Cash in April 1886 and a full-page advertisement for the Typograph appeared in the 1891 edition of Geers’ Business Directory for Hartford. 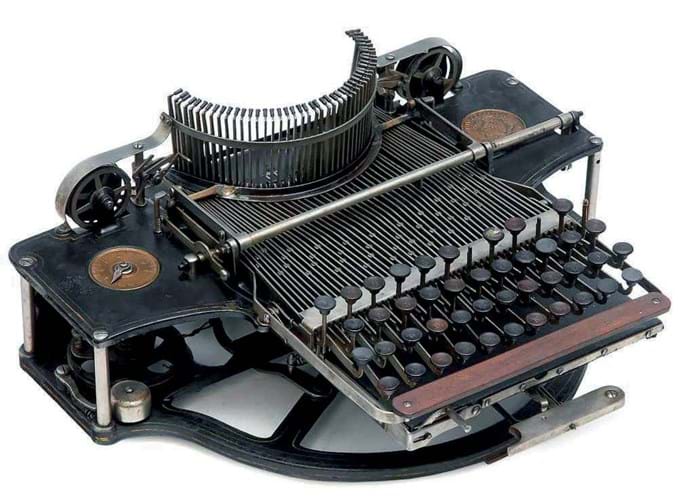 The Jackson Type I designed by factory foreman Andrew Wilton Steiger (1856-1935) was promoted as the ‘fastest machine in the world’ and priced at $100. The curious ‘grasshopper-action’ is described by Darryl Rehr in Antique Typewriters and Office Collectibles (1997): “Each type-bar resembles an elongated pantograph, with the scissors action accomplishing the mechanical gymnastics [that causes each bar to] do a somersault on its way to the platen…”

The example at Breker, bearing the maker’s plaque reading Patented Jackson Typewriter, Boston, Mass with the serial no 597, was one of only a few units produced (the Type II made c.1903 has a different typebar arrangement and keyboard layout).

Qwerty spelt the end for the Niagara