The Paris drawings fair 'Salon du Dessin' has been postponed until the end of May because of the coronavirus alert, but some specialist auctions that are scheduled to coincide with the event are still going ahead at the time of writing. The organisers previously announced the fair would go ahead but because of the latest restrictions on public gatherings in France the upcoming event scheduled to be held at the Palais Brongniart in from March 25-30 has been postponed.

Organisers now intend to hold the Salon from from May 28-31 at the same venue.

Thirty-nine galleries specialising in Old Master, modern and contemporary drawings were due to take part.

The Salon is in its 29th year and attracts collectors, curators, scholars and connoisseurs from all over the world.

Earlier this month, the Paris book fair Salon du Livre was also postponed. With visitors expected from 50 countries, the event had been scheduled for March 20-23.

Please check with the individual auction houses closer to sale date that they are going ahead as planned.

For the fourth year running, on March 27 Sotheby’s Paris rooms mark the occasion of drawings week with a sale that spans works on paper by 19th century masters such as Delacroix and Victor Hugo through to modern masters of the 20th century such as Picasso, Chagall and Modigliani.

One of the highlights will be a rare 1885 drawing in black Conté crayon by Paul Signac of a woman sewing at a table, a study for his first Neo-Impressionist painting Les Modistes.

Never offered before on the market and a rare example of his dessins noirs remaining in private hands, it has an estimate of €120,000-180,000. One potential highlight is a pen, ink and wash drawing illustrating an Old Testament scene from the story of David by Polidoro da Caravaggio, a pupil of Raphael who worked with his master on the paintings in the Vatican Loggia.

The sale also includes a section of 18th century drawings by a Brussels-based collector that features works by French, German and Italian artists. One is a red chalk sheet by Watteau that has two seated women to one side and a variety of figure studies to the other. The work has a provenance back to the 18th century, to the collection of Jean Denis Lempereur whose stamp it bears. 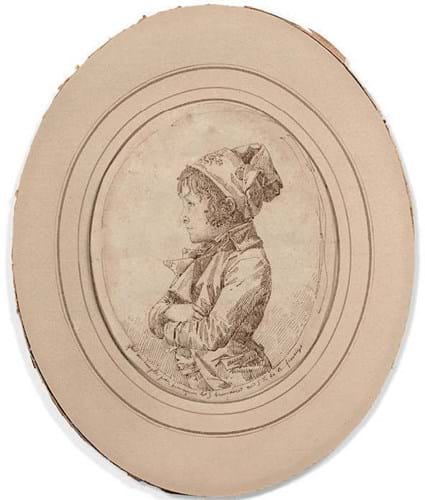 Philippe Auguste Hennequin’s drawing of a young boy in Revolutionary costume done when the artist was in the Temple prison – estimate €2000-3000 at Artcurial on March 25.

Not everything in the sale has guides of six or five figures.

There is an estimate of €2000-3000 on a little oval pen and ink portrait from the French Revolutionary era by Philippe Auguste Hennequin The 6¼ x 5¼in (16 x 13.5cm) portrait shows the subject in profile wearing a Revolutionary costume and is signed and dated faite au temple par hennequin le 5 brumaire an 5 de la R. francaise.

Lyon-born Hennequin, a pupil of David, spent time in the Temple prison himself after he was arrested, following an accusation of participation in the babouvist conspiracy to overthrow the Directory, on September 1796. He was imprisoned in the cell formerly occupied by Marie Antoinette, which he shared with Sir Sidney Smith (who he also depicted in a pen and ink portrait dated 28 brumaire a few days after this drawing of the boy was created).

Hennequin was released from prison in January 1797.

The drawing has provenance back to 1942 when it was sold at Drouot from the collection of Maurice Michon.

A group of auctions was scheduled to take place at the Hotel Drouot during drawings week. However, in a statement on March 16, the auction centre said:

“In accordance with French government directives, the Drouot is closed until further notice. We thank you for your understanding and will keep you informed as soon as possible of the auctions’ calendar.”