'Going to the Match' signed limited-edition print by LS Lowry – £25,000 at Tennants.

LS Lowry’s (1887-1976) football pictures combine his two most popular subjects: the industrial landscape and the working man at play. This is the reason they are among the Salford painter’s most sought-after pictures on the secondary market.

An avid supporter of Manchester City, Lowry painted several canvases of fans on their way to or at games. Going to the Match (1953) was famously purchased by the Professional Footballers’ Association for £1.75m at Sotheby’s in 1999 (now on loan to the Lowry in Salford) and in May 2011 The Football Match (1949) was knocked down for £5m at Christie’s.

The market for limited-edition prints by Lowry, produced commercially in the 1960s-70s and signed by the artist, mirrors this demand for footballing subjects.

On February 29, North Yorkshire saleroom Tennants (20% buyer’s premium) in Leyburn set a new auction record for a limited-edition print by Lowry. This version of Going to the Match, produced in an edition of 300 published in 1972 by the Medici Society, had been in the same family since the early 1970s and came in a ‘very good state of preservation’ with only light staining to the margins.

Going to the Match has long been Lowry’s most popular print. Another from this series sold at Tennants in 2015 for £20,000 while several more examples since then have nudged close to that figure. This new print record at auction also reflects the growing demand for Lowry prints over the past decade.

According to Mark Littler, an independent expert in the valuation and sale of Lowry prints, prices begun to rise quite sharply shortly after a handful of mainstream London galleries, such as the Whitewall Galleries, entered the field in 2015.

“These galleries have taken a strong market position on Lowry and are pushing his works to a much wider audience. As retail prices have increased auction prices have naturally gone up as well,” he said.

An early flower still-life in oils by Berkshire-born artist Eliot Hodgkin (1905-87), a cousin of Abstract painter Howard Hodgkin who had a life-long fascination for depicting plant forms and growth, was knocked down to a UK private buyer for a multi-estimate £10,000. It had last sold for a premium-inclusive £2125 at Christie’s South Kensington in 2011. Titled Mixed Flowers and Scissors and signed and dated 1935, the 2ft 3in x 2ft (70 x 61cm) oil on board was similar to a still-life titled October (1935) and painted on plywood in the collections at the Tate. It was also painted a year before Hodgkin’s landscape Worthy Down (1936), which Tennants sold last year for £5000.

These early floral arrangements and vegetation paintings were replaced in the mid-1930s with the artist’s signature tempera still-lifes of highly detailed small natural objects, such as turnips, lemons and eggs.

Nearly a dozen of John Piper’s (1903-92) textile designs for David Whitehead and Sons, a fabric mill in Lancashire, were contested at Tennants. These colourful Abstractions, some on fabric and paper others in mixed media, were executed in the 1950s and came from the descendants of George Butler who was chief designer for the mill. The working relationship between Piper and Butler was illustrated through several letters between the two which were also offered for sale. 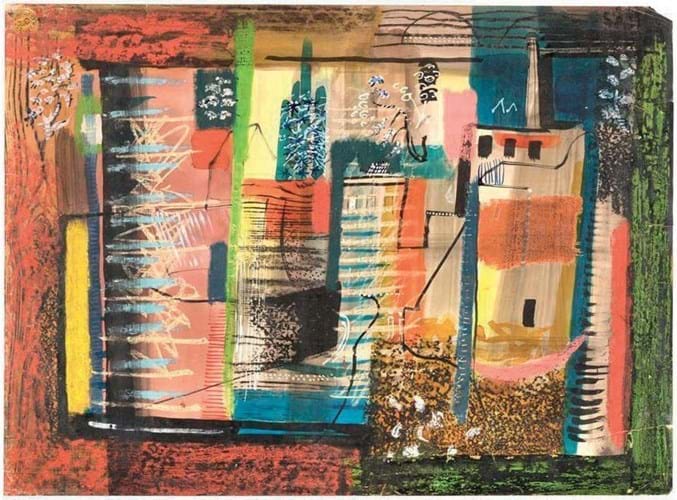 3. Cathedral design by John Piper for David Whitehead and Sons – £7000 at Tennants.

The financial star was a 22in x 2ft 6in (56 x 76cm) mixed-media cathedral design with a Schoellers & Parole blindstamp, tipping over top estimate to make £7000 despite a large tear to the lower portion.

The sale included a group of avant-garde works by the post-war British New Vision Centre Group from the estate of one of the artists, Marie Walker Last (1917-2017).

Last became involved with the non-figurative art group in 1959, a few years after it was set up by Denis Bowen, Halima Nalecz and Frank Avray Wilson. The group promoted the work of young Abstract and avant-garde artists – showing work at several gallery exhibitions and culminating with a solo exhibition in 1961.