The spread of coronavirus may have halted the auctions at this year’s 'Asia Week New York', but dealers are going ahead with the event as planned, bringing together more than 35 exhibitors and nearly 20 talks. 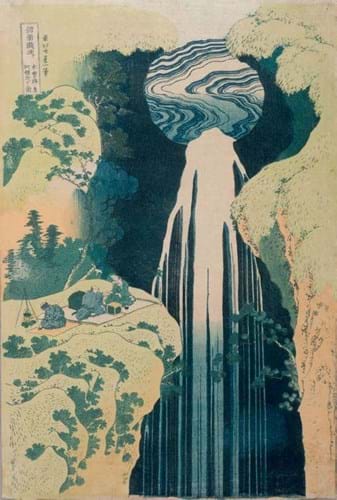 ‘Amida Waterfall in the distance on the Kisokaido’ by Hokusai – priced under $60,000 by Joan B Mirviss at 'Asia Week New York'.

The 11th edition of the week runs from March 12-19 around various New York City locations.

Events on offer include a tour of a Boro textiles exhibition at Japan Society, a talk on Jewellery and Social Status in Asia by Susan Ollemans and another titled Two Emperors: A Double Portrait of 1610 from Mughal India by Brendan Lynch of Oliver Forge and Brendan Lynch. Many more are listed online.

Below are previews of some of the works on offer at various galleries during this staging.

A woodblock print by Katsushika Hokusai is part of Ukiyo-e from the Collection of George Crawford, an exhibition staged by Japanese art dealer Joan B Mirviss.

The scene of Amida Waterfall in the distance on the Kisokaido is not one of the best known in Hokusai’s Thirty-six Views of Fuji (c.1830), but the rare scene is dramatic and naturalistic. It is offered for a price under $60,000.

Crawford built up a collection of Japanese woodblock prints at auctions of the 1970s-80s as well as from American dealers. It is particularly strong in 18th century kabuki actor prints by artists such as Okumura Masanobu, Katsukawa Shunsho. A selection of poetry prints (surimono) from the collection is also available. Meanwhile, the dealer also stages a show of contemporary ceramics: Restraint and Flamboyance, Masterworks of Mino. Portrait of the Emperor Shah Jahan is a rare painting from Kishangarh, India. The fifth Mughal emperor, Shah Jahan (1592-1666), presided during the height of Mughal architecture and was responsible for the construction of the Taj Mahal.

The delicate treatment of the emperor’s face, his elegant horse and its trappings suggest that the work is from the 17th century. Painted in opaque watercolour and gold on paper, it is offered for $30,000 in Prahlad Bubbar’s exhibition Nature Observed and Imagined: The Mughal and Deccani Traditions which takes place at Jill Newhouse Gallery. It focuses on the first native religion of Japan which was based on nature and the spirit dwelling within mountains, trees and the deceased.

The deity is in the court style and stylistic features such as its headdress suggest its date. A carbon 14 test confirmed that the wood was from the 7th century, but the use of old wood was common in Japan.

There are an estimated 8m kami or gods known, so it is difficult to pin down a precise identification, but it may be a representation of Tenjin, or Sugiwara No Michizane, noted scholar and poet, who was disgraced and ostracised during his life, but deified after his death due to adverse events that befell his accusers.

A Ryukyuan mother-of-pearl inlaid lacquer stand, offered for $35,000, is the centrepiece at the exhibition Privileged staged by Kaikodo. The chain of islands known as Ryukyu extends from Kyushu to Taiwan and is also known as Okinawa. Lacquer-making has been a traditional activity there since the late 14th century when ties were established with the Ming dynasty in China.

This stand, which is from the 17th or 18th century, might have been made to display a vase of flowers or may have been presented as a work of art in its own right.