Our selection of books, maps and works on paper available to view and buy from dealers online. This rare optical print, c.1780, depicts a bird’s-eye view of the town of Batavia from the sea. Printed by Bergmüller with text in both German and French, it is offered for €575. A rare first edition copy of The Principles of Mr Harrison’s Time-Keeper (1767) – the primary account of the invention of the marine chronometer - is available for £100,000. The text is accompanied by 10 folding engraved plates showing the technical details of John Harrison’s celebrated fourth timekeeper, H4. Proof copy of Anthony Powell’s ‘A Question of Upbringing’, £3750 from Rainford & Parris Books.

Anthony Powell is best known for his 12-volume novel A Dance to the Music of Time, published from 1951-75. The opening novel in the cycle is A Question of Upbringing, a proof copy of which Rainford & Parris offers on AbeBooks for £3750. As the wraps were printed on the verso of an unused illustration from another book published by Heinemann, parts of a bull terrier are visible on the inside cover. This unrecorded album of watercolours is by Sarah Stone (1760-1844), the artist best known for her contribution to the study of the natural history in the Pacific and Australia. This collection has a provenance to her family. It is available for Aus$145,000. Pictured in this autographed portrait, c.1900, is Harry Lauder (1870-1950), a Scottish miner-turned-comedian and music-hall star who achieved international success. This image is one of nine taken by Willie Ross showing the performer in various costumes. The photos are offered together for £1750. This early printing of John Speed’s map of Cambridgeshire dates from 1612-c.1616, soon after the atlas’s first edition. The uncoloured image (with no text to the reverse) is included in Jonathan Potter’s 30% off sale offered for £1820 down from £2600. Eight autograph letters from José Ortega y Gasset, priced at $8500 or $2000 each from Tamino Autographs. This 14 x 23in (36.5 x 60cm) engraving of a tapestry depicting the Spanish Armada off Plymouth Sound is taken from the 1739 plate book by John Pine The Tapestry Hangings in the House of Lords. It is available for £850. Published in 1604, this folio contains the complete works of Seneca in Latin as well as some in ancient Greek. Stamped to the morocco binding with the arms of a Knight of the Garter its edge papers are stained in red ink suggesting it came from a monastic library. Available on eBay for Aus$20,000. ‘A Portfolio of 10 Paintings’ by Piet Mondrian, $22,000 from The Manhattan Rare Book Company. This copy of South Riding by Winifred Holtby is from a limited edition of 175 copies printed for the author’s friends and is offered for £600. 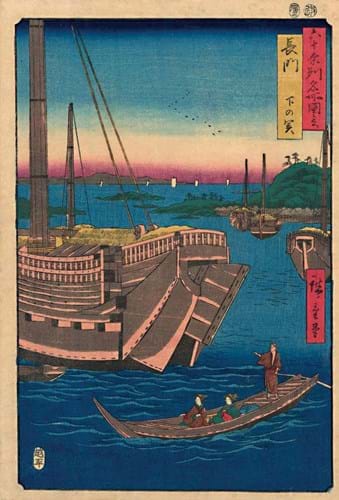 This view of Shimonoseki in Nagato Province is from the series Rokujūyoshū meisho zue (Famous views of the Sixty-odd Provinces) by Utagawa Hiroshige (1797-1858) published in 1855 by Koshimuraya Heisuke. It is offered in fine condition for €2000. Robert Hewlett’s albumen print of The Great Eastern Steam Ship from May 1856 is offered with a price tag of £1750. Twelve woodcuts by Paul Nash illustrate the first chapter of Genesis in this 1924 volume by Nonesuch Press. This copy in its original orange dust jacket belonged to Desmond Coke, a friend of Nash, and comes with a letter from the artist. It is priced at £4750. ‘Peepshow’ by Martin Engelbrecht, €1250 from Cartorama.

This ‘peepshow’ by Martin Engelbrecht (1684-1756) shows the kitchen of a country house. It features six pieces of hand-coloured copper engraved scenery – including a maid chasing a cat. In a modern box, it is priced at €1250. 1881 map of Western Palestine by CR Conder and HH Kitchener, £950 from Fishburn Books.

This 1881 map of Western Palestine was drawn by CR Conder and HH Kitchener from surveys conducted for the Committee of the Palestine Exploration Fund. Priced at £950, it folds into an original cloth box with a label for the publisher Edward Stanford. More than 300 sketches completed by Ruytchi Souzouki in Paris from 1949-62 are offered for £3500. They depict scenes from films and other popular entertainments of the day – among the recognisable faces are Sophia Loren, Bob Hope and Lucille Ball.

Souzouki had been a popular and respected artist in the 1920s-30s but his Japanese citizenship led to his increasing isolation during and after the war. Large folio first edition of ‘The Grammar of Ornament’ by Owen Jones from 1856, £11,000 from Potterton Books.

This large folio first edition of The Grammar of Ornament by Owen Jones from 1856 includes 100 full-page chromolithographic plates, many highlighted in gilt. It is offered in its original gilt-decorated ornamental binding for £11,000. The Flora Londinensis offers a history of indigenous British plants, but particularly those found in the London region in the mid 18th century. It was originally compiled by William Curtis in 1777, but the edition here, offered for £17,000, was that enlarged, edited and rewritten by William Hooker and George Graves in 1817. The five-volume work includes 647 hand-coloured plates – 432 from the Curtis first edition. Map of the East Indies is from Willem Jansz Blaeu’s 'Atlas Novus' published in Amsterdam, c.1640, £1400 from Sanders of Oxford.

This map of the East Indies is from Willem Jansz Blaeu’s Atlas Novus published in Amsterdam, c.1640. It is shows much of Asia and some of Oceania, though most of Papua New Guinea is a blank and only a small section of the western Australian coast is included. Available for £1400. Offered with a price tag of £6500, this first edition of Peter Pan in Kensington by JM Barrie features pictures by Arthur Rackham. The binding by Cedric Chivers is in full morocco with hand-painted vellum panels. One of the 1067 woodcut illustrations from the second edition French translation of the ‘Hortus sanitatis…’ published by Phillipe Le Noir of Paris in 1539, €50,000 from Hugues de Latude Livres Anciens.

Pictured here is one of the 1067 woodcut illustrations from the second edition French translation of the Hortus sanitatis… published by Phillipe Le Noir of Paris in 1539. It describes species in the natural world along with their medicinal uses. This copy, which features contemporary hand colouring, has a price tag of €50,000.