Interest in glyphic art, that reached its collecting apogee during Grand Tour collecting, is resurgent once more. Museum and dealer exhibitions, new collectors, new literature – and a sense that the market was undervalued – have prompted a spate of strong prices at auction.

Last year, in particular, was a renaissance moment for hardstone cameos and intaglio gems. The year that began with the sale of a sardonyx cameo ring by the noted English engraver Nathaniel Marchant for £39,000 at Tennants of Leyburn in January included the re-emergence of two of the ‘lost’ Marlborough jewels – a Renaissance period sapphire intaglio carved with the bust of Julius Caesar (£62,000 at Woolley & Wallis in July) and another with the face of Mark Anthony in golden sard (£36,000 at Cheffins in December).

So far in 2020, this ‘return to form’ has continued with Far Eastern interest growing.

Milnthorpe, Cumbria firm 1818 Auctions (20% buyer’s premium) posted a new house record for jewellery when a 33mm x 42mm neoclassical sardonyx cameo mounted in gold sold for £17,200 as part of a timed sale on thesaleroom.com closing on June 7. The estimate was just £200-300.

Key to its appeal was its outstanding quality and the presence of the signature Cerbara for a member of the Rome dynasty of medallists and gem-cutters. Given a probable date of c.1820, the most likely candidate is Guiseppe Cerbara (1770- 1856), master of the papal mint from 1822 who oversaw the creation of papal medals before he was succeeded by his younger brother Nicolla Cerbara (1796-1869).

Against interest from Hong Kong, the brooch (in good condition save a minute area of discolouration) was eventually bought by a London jewellery dealership.

Intaglios once owned by Prince Stanislas Poniatowski (1754-1833) are always of interest to collectors. The nephew of the last king of Poland, who went into affluent exile in Italy in 1791, he was a passionate collector of antiquities but also the commissioner of an extraordinary series of around 2500 neoclassical intaglios.

He encouraged the belief that these were ancient gems, publishing a series of catalogues complete with elaborate descriptions in 1833, so when his collection was offered for sale by Christie’s in London after his death in 1839, connoisseurs and potential buyers were outraged to discover that the gems were ‘modern’. Today, they are appreciated in their own right as fine examples of Italian neoclassical gem-engraving.

The buyer of all three at well over pre-sale estimates, was a private collector from China.

The first of the three was a carnelian scene of Hercules killing Erginus, which realised £3600 followed by Ulysses receiving the winds from Aeolus in a gold mount sold for £2400 over seven times its pre-sale estimate.

The third engraved stone, particularly desirable as an amethyst and also with a gold mount and chain, depicted Apollo and Cyparissus. It achieved £6000, three times its low estimate. Bonhams also sold a group of 10 unmounted carnelian Poniatowski gems in February for £15,500. In this positive atmosphere, more good things are coming to market. 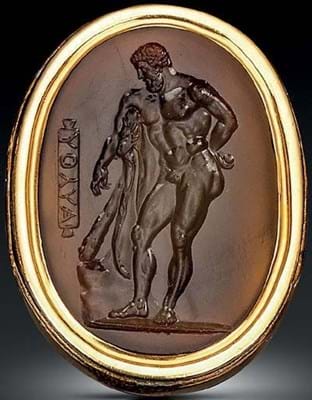 The sale at Bonhams Australia on July 8 opens with 28 lots from the Grice collection. Father Peter Grice (1943-2019) lived frugally in Brisbane – he never owned a car and never owned a TV – but was a polymath collector.

Six years in Rome helped focus his tastes for Asian art (sold by Bonhams in May) and the Grand Tour mosaics and hardstones offered as part of the Australia Jewels sale this month. Highlights include a ring by Nathaniel Marchant (1739-1816) depicting an avenging angel brandishing a palm-branch after Raphael’s Heliodorus in the Vatican. Studio ceramics as a way of life

Pick of the week: Romantic poet Byron remembered in the form of a mourning ring

Relic of George III at Fellows