At nearly 2700 lots, the four-day sale at Adam Partridge (20% buyer’s premium inc VAT) on May 26-29 was among the largest art and antiques auctions staged during the UK’s lockdown. And a logistical challenge.

With the catalogue online for two months, a record number of bidders registered – 5016 in total – with over three-quarters of them using thesaleroom.com.

As well as managing the deluge of enquiries that poured in from online platforms, phone and commission bidders, the Macclesfield saleroom’s staff also set up an outdoor marquee with designated collection bays for buyers to pick up their purchases while maintaining social distancing.

The auction included 232 lots of paintings, watercolours, drawings and prints offered on the third day. These lots produced many of the leading prices of the catalogue with only 19 pictures unsold.

Christopher Surfleet, auctioneer and senior valuer at Partridge, said: “I think the crucial thing in the picture market that was highlighted at this auction was the importance of originality, freshness and sensible estimates.”

Most notable among the pictures from the consignment was an atmospheric Venetian canal scene by Henry Pether (fl.1828-65). Pether’s stock-in-trade (and those of other family members) were moonlit views of London and the English countryside but Venice scenes also commanded a significant proportion of his oeuvre.

This 2ft x 3ft (61 x 91cm) oil depicted the church of San Simeone Piccolo to the left and Santa Maria Di Nazareth Degli Scalzi to the right. With boats and gondoliers quietly moving through the water and the moon low in the sky, it was highly characteristic of Pether in subject, composition, detail and technique.

Although the canvas was thinning in parts and it suffered from some staining to the centre of the image, it promised to benefit from some sensitive restoration and hang well in its period gilt frame.

The estimate was kept relatively low at £5000-8000 which proved tempting to a number of interested parties. It eventually sold at £20,600 to one of the auction house’s regular clients. It was the second-highest price of the sale overall – only a diamond solitaire ring that made £24,400 fetched more.

The price was among the highest sums for a work by Pether outside the main London rooms in the last decade, although behind some results for major works, such as View of the Thames at Lambeth Palace by moonlight that made £32,500 at Christie’s in April 2010. From the same collection at the Partridge sale was an unsigned Pre-Raphaelite style painting of two girls playing musical instruments. It was in fact a copied detail from John William Waterhouse’s St Cecilia, the two figures appearing in the bottom left of the 1895 painting.

The Scottish painter, who was also a designer and administrator, was deeply influenced by both the Pre-Raphaelites and also Renaissance art. During his trips to Italy he met members of the Nazarene movement – the group of predominantly German artists who were active in Rome and sought to revive the spirituality in art.

Plenty of works by Dyce can be found in UK public collections, especially in his hometown of Aberdeen.

The condition was not ideal (the paint was coming away in places), but a number of bidders felt it was a good prospect especially against a £300-500 pitch. It eventually went at £3000 to an Austrian buyer on thesaleroom.com. 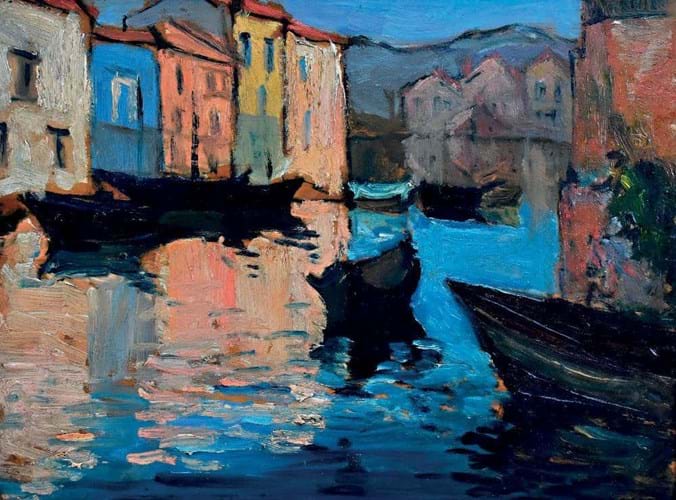 The third picture from the London source was a small oil on panel catalogued as by Albert Marquet (1875-1947).

Works by the French painter, a lifelong friend Henri Matisse and a painter of bold and colourful Fauvist pictures of ports, bridges and quays, can make six-figure sums.

This 9½ x 13in (24 x 33cm) study of fishing boats beside sunlit buildings, with two old Christie’s stencils to the reverse, was a more modest sketch although an appealing prospect at £2000-3000. It sold at £6800 to the UK trade also via thesaleroom.com. Lancaster Sands, a watercolour by David Cox – £9400 at Adam Partridge.

This picture had provenance to dealer Agnews and came with the original receipt from 1901 when it had been bought by the vendor’s grandfather for £300 – similar to £35,000 today.