A trio of five-figure offerings got Salisbury auction house Woolley & Wallis (25% buyer’s premium) off to a great start for 2020. The January 8 sale of Furniture, Works of Art & Clocks took £700,000, a record total for the traditional New Year opener in Salisbury.

Regarding those three top results, (that collectively accounted for two-fifths of the total), a £80,000 ‘Jupe’ table featured as our Pick of the Week in ATG No 2425 and the best-selling, £99,000 Louis-Phillipe candelabra also covered in detail this edition.

The third item was typical of the furniture produced in 18th century Canton or Macao for the Western market – a near pair of 5ft 11in (1.82m) bureau cabinets in quasi-George III style.

Probably commissioned by a wealthy East India Company official, these were made of native padouk wood and the rarer huanghuali, the rosewood-family timber which was the choice of Ming and Qing emperors and keenly sought today. The handles and escutcheons were cast in the copper and nickel alloy paktong.

The cabinets, bought by the vendor’s husband at Sotheby’s in 1980 at a time when only a Western buyer would have deemed them of interest, were estimated at £15,000-20,000. All the bidding this time came from six Chinese rivals, one of them successful at £90,000.

A 90% selling rate was an indication that this was very much a curated sale – filled with period standards but most of them offering a little bit extra in terms of quality, design, condition or price. This approach helps to counter the current market challenge in which many decent pieces of antique furniture no longer achieve £500 at auction. 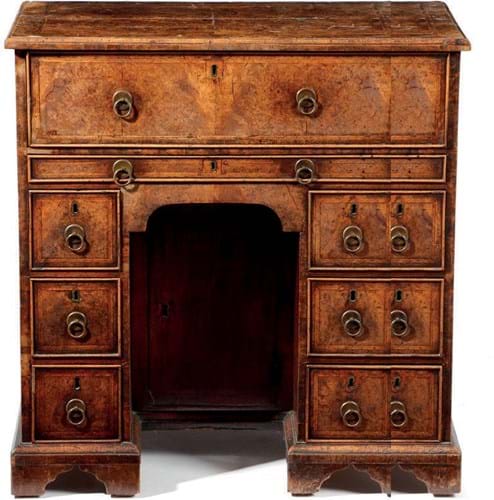 The London trade bid strongly for some of the more commercial lots.

A set of six George III painted open armchairs in the neoclassical taste, with oval backs guilloche-carved frames and individual needlework upholstery, went at £7500 – five-times an estimate of just £1000-1500.

London dealers were also interested in a textbook George II walnut and burr walnut secretaire kneehole desk, with a quarter-veneered top and fitted secretaire drawer that measured just 2ft 4in (69cm) wide. However, a private buyer took it at a triple-estimate £6200.

Best of the mirrors was George III giltwood wall example with rocaille work in the manner of John Linnell. Topped by basket of flowers surmount, it measured 6ft (1.84m) tall. With some regilding, it took a top-estimate £6000 from a London dealer.

Leading the Regency furniture was a fine-quality fiddleback mahogany and brass-mounted breakfront side cabinet made in the French manner with a grey marble top, three frieze drawers, four brass grille cupboard doors and fluted columns.

American bidders joined European hopefuls when a 17in (43cm) tall carved wood and polychrome decorated figure of St Francis of Assisi holding a book came up with an estimate of £400-600.

It was probably 17th century and Spanish or Italian and one of number of lots from the collectors Monty and Barbie Passes. Again, however, it went to a UK buyer with a bid of £3800.

Topping the Victorian furniture was an in-demand Howard & Sons easy armchair, stamped to a back leg and brass castors. It was one of 40 lots catalogued as ‘the property of a noblewoman’ and tripled expectations at £3200 to a UK private buyer. 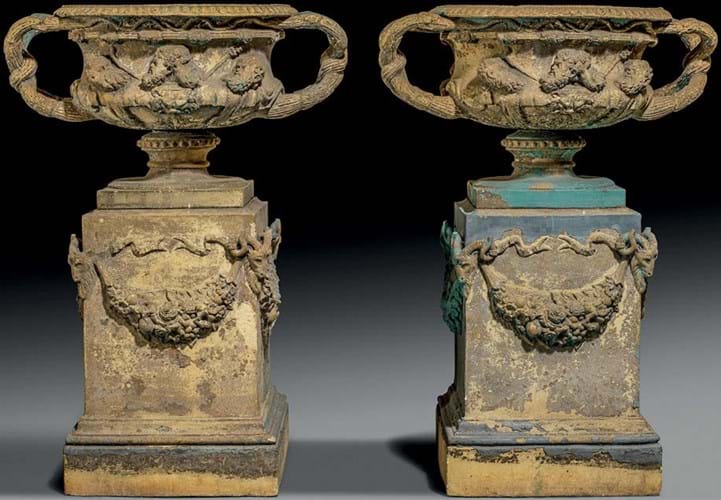 The same consignment included a large pair of Victorian terracotta models of the Warwick Vase in the manner of noted architectural modeller Mark Henry Blanchard. The history of the much-copied vase was discussed among the silver sales in ATG No 2425. The 6½in (17cm) tall clock had an eight-day single-chain fusee movement with maintaining power, bi-metallic cut compensated balance and Earnshaw spring detent escapement. All English chronometer timepieces are fairly rare, particularly those by the McCabe family firm at London’s Royal Exchange, although another of a similar date took £14,000 at Sussex auction house Bellmans in November.

“It was a 17th century as opposed to 18th century case and these are in short supply – many movements but not many cases around,” said specialist Mark Yuan Richards.

“There was also the fact that case came in from a good consignment that had been in store for last 30 years.” A pair of 2ft 2in (67cm) tall, George IV gilt bronze table lamps, also from the Monty and Barbie Passes collection, shone on their own merits. Made c.1825, they were crisply cast as torcheres with acanthus, eagles, lion’s paw feet and scrolling leaves and palmettes. These more than doubled top hopes, going to the London trade at £6500. An Italian kunstkammer coral branch, issuing from an ebony lobed urn, was probably 18th century. Standing 10½in (26.5cm) high, it was estimated at £600-800 and attracted bids from Europe and China before selling to a UK collector at £5200.