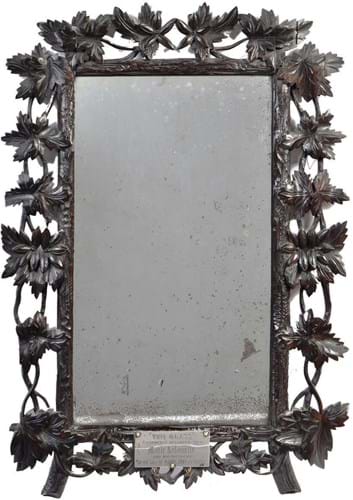 Looking glass sold by East Bristol Auctions for £8500 with a plaque on the 19th century frame stating that it had once been owned by Marie Antoinette and had come from the estate of Napoleon III.

It may have once graced a room in one of Marie Antoinette’s (1755-93) palaces and passed through the hands of Emperor Napoleon III’s wife Eugenie (1826-1920). But until recently this looking glass was in a family bathroom in a house near Hull.

Aiden Khan at East Bristol said: “With something like this, provenance is everything and this has a wonderful paper trail – it actually appears in a catalogue from an auction held in the 1889 at Camden House in Kent, for the estate of the late Napoleon III.” He said it is likely to have formed part of a larger mirrored display in one of Antoinette’s palaces.

It sold to a UK-based collector for a hammer price of £8500. Plaque on the 19th century frame of the looking glass sold by East Bristol Auctions for £8500, stating that it had once been owned by Marie Antoinette and had come from the estate of Napoleon III.

Inscribed in pen on the heel Soulier de Marie-Antoinette donné à M.de Voisey, it came by descent from Charles-Gilbert de Lachapelle (1755-94), head of the offices of the civil list whose wife Marie Emilie née Leschevin was a close friend of Marie Antoinette’s first chambermaid.