Since its launch in 1953 there have been well over a dozen distinct references of the Rolex Submariner, with all sorts of minutiae adding up to several hundred different variants. 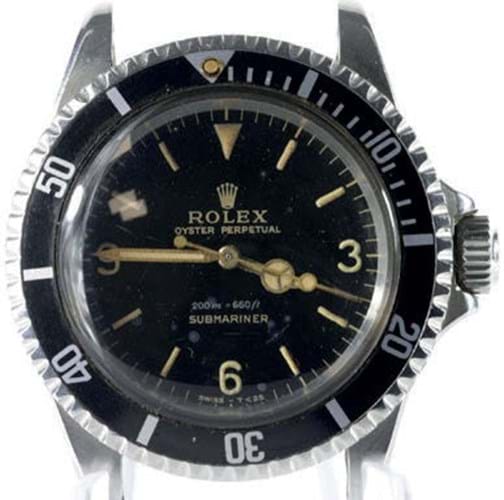 Among the most collectable are the 5513 series from the 1960s and of these watches, those with the so-called Explorer dial are ‘grail’ objects.

While the majority of Submariners were fitted with standard ‘dot’ hour markers, the Explorer dial has the Arabic numbers at 3-6-9 and slim batons at the other hours. The dial text is reduced in size a bit to give the luminous numerals maximum visibility.

These watches, popular for their James Bond association, have become very expensive indeed.

Back in 2017 Lockdales (18% buyer’s premium) of Martlesham Heath near Ipswich set a house record when one sold at £230,000. Remarkably, the auction house found another 5513 Explorer dial for the sale on February 19-20 this year.

Family owned since new, it came with its original box and a selection of paperwork with an estimate of £50,000-80,000. The hammer price of £150,000 (£182,400 including premium) was described as “life-changing sum of money” for the vendor who now plans to retire from full-time work. The market for vintage tool watches continues to burn hot.

Heuer made several watches for the sailing community as part of the Carrera range in the 1960s: the Seafarer, the Mareograph, the Skipper, the Regatta and the Yachting timer. The latter, also known as the reference 2447, was the first Heuer case to have a screw back.

The reference 2447S was a special order as it features a custom dial displaying at 3 o’clock three sky blue triangles designed to assist skippers with the 15-minute countdown to the start of a regatta.

Only a handful of these watches are known and the example offered for sale by Burstow & Hewett (20% buyer’s premium) in Battle, East Sussex, on March 18 was in good original condition and in working order. It was estimated at £5000-8000 but sold via thesaleroom.com at £13,000. A complete set of ‘Dirty Dozen’ watches – £25,000 at Watches of Knightsbridge.

The March 28 online-only sale at London specialist Watches of Knightsbridge (25% buyer’s premium) included a complete set of the so-called ‘Dirty Dozen’ watches – the 12 Swiss manufacturers commissioned to supply the British Ministry of Defence during the Second World War. It sold online as a single lot for £25,000.

The full set consists of watches by Buren, Cyma, Eterna, Grana, Jaeger Le Coultre, Lemania, Longines, IWC, Omega, Record, Timor and Vertex. The majority have serial numbers to identify the wearer and symbols to show them to be government property. Many are engraved WWW, which in the 1940s stood for Watch, Wrist, Waterproof.

The rarest of the ‘dozen’ is the unassuming Grana military issue manufactured to MOD specifications by Kurth Freres. It has been estimated that around 1500 units were made compared to equivalents by Omega (25,000) or IWC (8000).

Pick of the week: The time to take a stand with vintage Rolex accessories