An exhibition on perspective held by Dr Jörn Günther Rare Books is one of several thematic events at this year’s Frieze Masters. At the centre of the show is a Sammelband, or collection of texts, that German Renaissance artist Albrecht Dürer (1471-1528) completed towards the end of his life.

The work consists of three artists’ manuals: a treatise on perspective and mathematical proportion in art, a discourse on fortification and a work on proportions of the human body.

Each volume feature woodcuts illustrating ideas that Dürer had learned in Italy. The works remained key aesthetic texts for centuries to come.

The Sammelband is among 15 items showcased in the exhibition. There are also treatises by Dürer’s student Erhard Schön and Wenzel Jamnitzer, including a group of impossible geometric forms.

Frieze Masters, now in its eighth edition, runs in Regent’s Park from October 3-6 along with its sister contemporary art fair Frieze London. Offering top art and antiques from across the millennia, the fairs attract both museums and collectors during the annual period now known as ‘Frieze Week’.

Around 130 exhibitors from across the globe stand at Frieze Masters, embodying the “international spirit of London, a city that is a meeting point for art, ideas and people from all over the world,” according to director Victoria Siddall.

Over the years ‘satellite’ events have sprung up around the two fairs in London – some started by Frieze itself, such as the public sculpture display coinciding with the fairs in Regent’s Park. Other external events have been scheduled to coincide with them (see British Art Fair pg28).

But Frieze also prides itself on the micro’ ‘events’ taking place within each marquee.

At Frieze Masters, the Spotlight section features a series of solo presentations by 20th century artists, including US photographer Gordon Parks. His documentary images of American life, focusing on African Americans and issues of civil rights and poverty, are brought by Alison Jacques Gallery. The London gallery (also standing at Frieze London) took over representation of the Gordon Parks Foundation earlier this year. 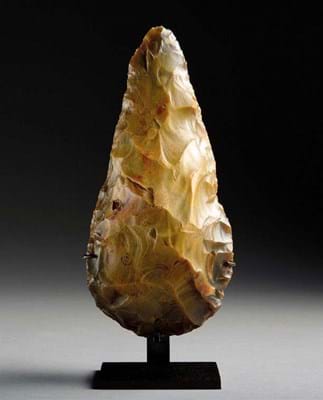 Elsewhere, certain exhibitors focus on specific movements. Hazlitt Holland-Hilbert showcases British Pop artists such as Patrick Caulfield, Peter Blake and Eduardo Paolozzi. It includes You Dare (1967) by provocative painter and sculptor Allen Jones, a composition that includes a set of steps protruding from the frame.

Though there is a wide selection of modern offerings, many dealerships also showcase pre-20th century art.

Probably the oldest object on show is a prehistoric axe offered by ArtAncient, newcomers to the fair. The large flint handaxe, just under 8in (20cm) long, is from Norfolk and dates to the Lower Palaeolithic era, c.400,000-150,000BC. It was found in a Keswick Mill gravel pit in 1959.

Trinity Fine Art brings a painting pitched as the ‘last’ Sandro Botticelli, a portrait of Renaissance scholar Michele Marullo, and Peter Harrington Rare Books offers a first edition of Descartes’ Discours de la Méthode, one of the first European works of philosophy not written in Latin.

Richard Nagy and Yves Macaux are among those teaming up to create an ‘immersive’ interior stand, presenting a c.1900 Viennese Gesamtkunstwerk, or total work of art, featuring Secessionist artists and decorative works.

The Art Fund Curators Programme offers a show on portraiture and the Frieze BBC Debate covers museums in the 21st century. A portrait by Botticelli offered by Trinity Fine Art at Frieze Masters.

A portrait by Botticelli of 15th century poet and soldier Michele Marullo is offered by Trinity Fine Art for a sum in the region of $30m. The gallery says the work is believed to be the last painting by the Renaissance master still in private hands, though it hung in the Prado for 12 years.

Marullo was a Greek scholar and humanist who, among other accomplishments, compiled a large collection of epigrams in four books.This is the only depiction of the sitter.

Its appearance at the fair follows the surprise sale of a work catalogued as ‘in the style of Sandro Botticelli’ that sold for 914 times its top estimate at Schuler in Zürich (see ATG issue 2400). It was knocked down for SFr6.4m (£5.16m), suggesting that bidders detected the hand of the master.