Teacher’s single-owner collection stands out as part of Modern and Contemporary art sale. It almost goes without saying that a discerning eye and good provenance achieve favourable results in this business.

These were the qualities that applied to the single-owner collection of Edinburgh academic John Calcutt (1951-2018), whose 30-odd collection of works stood out in a sale of Modern and Contemporary art at Edinburgh saleroom Lyon & Turnbull (25/20% buyer’s premium).

Calcutt, a teacher, writer and critic for The Guardian, was described at the time of his death last year as “no stuffy academic” (despite his 44 years working within higher education) and an “influential and much-loved teacher at the Glasgow School of Art who significantly shaped and informed the contemporary visual art scene in Scotland and beyond”.

The group at L&T featured works on paper by established Scottish artists such as Alison Watt (a former student) and Eduardo Paolozzi, together with examples by Contemporary artist Nicolas Party and American pop artists Roy Lichtenstein and Jasper Johns. In all, the collection contributed just under £55,000 to the £300,000 sale held on August 15. The young Swiss Contemporary artist Nicolas Party (b.1980) is currently attracting a flurry of interest. His 2012 monochrome work Flowers that took top honours at L&T.

The small-scale 19in x 2ft 3in (49 x 69cm) ink on paper bore a label for the Modern Institute in Glasgow (where his work is currently on view until the end of August) and sold for eight times the estimate to a private buyer bidding on one of eight active phone lines for £12,000.

Over the past two years Party’s work has attracted keen interest from collectors and speculators who believe he may be the next big thing. Not many of his pictures have made it to the secondary market. One of his large-scale landscapes did sell at Phillips in New York in May this year for an auction-record $608,000 (with fees).

Two of Alison Watt’s (b.1965) figurative canvases featured in the Calcutt collection. Apple Head, a diminitive 5in (12cm) square oil on board from 1994, sold to a phone bidder at £9500. Hand on left breast, an equally pocket-sized self-portrait, took £6500. Both were secured by private buyers above estimate.

Watt first rose to prominence in 1987 while still a student, winning a commission to paint the Queen Mother. Her work is not dissimilar to fellow Glasgow student Jenny Saville but without a million-pound price tag.

Private bidders capitalised on the opportunity to own works in print form by some major 20th century American artists. 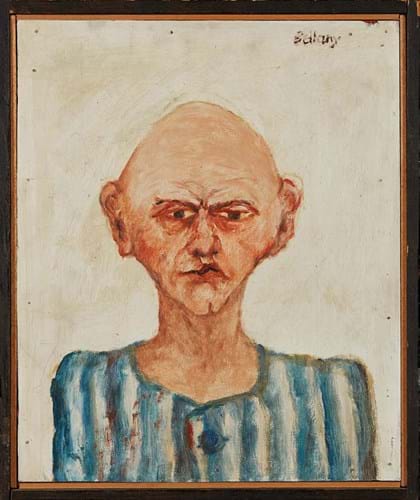 Away from the Calcutt collection, it was Scottish artist John Bellany (1942-2013) who sparked the biggest bidding tussles in Edinburgh.

A total of nine works ranging from early to later examples were offered, with seven getting away for a combined £42,600 total.

A rare entry depicted a prisoner with a shaved head and wearing blue and white striped pyjamas and dated from 1967 – the year Bellany travelled to Buchenwald concentration camp in then East Germany. The experience eventually led Bellany to paint his autobiography through a series of nightmarish sea voyages populated by himself and anthropomorphic animals, for which he is now so well-known.

Buchenwald Prisoner, small but well-sized for a Bellany work at 18 x 15in (45 x 37cm), came from a longstanding Scottish private collection and sold within estimate for £6500. A more typical depiction of two figures by Bass Rock in the east of Scotland was knocked down at £10,500 (£5000-7000 estimate).

Bellany’s results on the secondary market have been relatively consistent given the vast quantity of works that come up at auction.

“He was extremely prolific so there is loads of work out there and you do wonder if that is going to start to affect the prices, but it doesn’t seem to be,” said Shearer. She added that prices have been building since his death six years ago with a “big appetite among clients”, particularly for his earlier works.

Competition also emerged for an oil on canvas by Victoria Crowe (b.1946), the portrait and landscape painter who is currently the subject of a major retrospective at the City Art Centre also in Edinburgh.