Nottingham auction house Mellors & Kirk (20% buyer’s premium) added to the cautiously feel-good mood created by some highly successful autumn sales in the provinces when strong private buying brought impressive results across the board. Among the most eye-catching was a 4ft 2in (1.26m) high rosewood writing cabinet.

With gilt-brass mounts and marble slab, it was dated c.1810 but its major draw was the three pietra dura panels inset to the fall front – two of them from the Grand Ducal Workshops in Florence, c.1700-35.

Depicting volcanos and ruins in the manner of the Galleria degli Lavori, they were the finishing touches to a piece of quality furniture in fine original condition and with an elegant fitted interior. Estimated at £4000-6000, the cabinet sold at £10,000.

That price was exceeded only by the Ferdinand Preiss c.1925 bronze and ivory figure, The Archer, illustrated in the Bid Barometer of ATG No 2410. Coming to market for the first time since it was presented to an Admiralty official in 1930, it was in excellent condition and doubled expectations in selling at £13,000.

A major strength at Nottingham was the 87-lot strong silver section.

“Downsizers often say that their children do not want silver,” said auctioneer Nigel Kirk, “but, fortunately, it is highly desirable to collectors around the world.”

Top-seller was a 1780 silver soup tureen presented to a Royal Navy captain for saving a merchant fleet from the American privateer John Paul Jones in 1779 which made £9500 (see next week’s Militaria feature in ATG No 2414 for more).

Two other presentation pieces to attract overseas interests were modern regal boxes, one from the Emperor of Ethiopia, the other from the King of Thailand.

The 10½in (26.5cm) wide gold and silver casket was presented to the Governor of Western Australia by Haile Selassie in 1968. Engraved with details and offered with a printed card inscribed Made from Pure Silver and Gold at his Imperial Majesty’s Private Treasury, it sold to a Canadian bidder at £3000.

The 12½in (32cm) wide, silver gilt and niello cigar box given by King Bhumibol to the British ambassador in 1957 naturally drew bids from Thailand but sold to a UK private buyer at £3200.

Traditional Georgian classics such as a pair of neo-classical candelabra and boxed tea caddies and sugar bowl were also in demand. 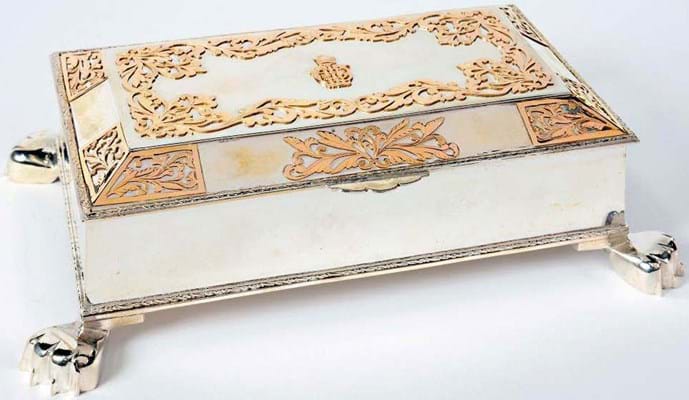 The caddies, engraved with armorials, and the silver-mounted cut-glass bowl, were by London smith John Robins, London, 1799 and 1800. They were housed in the original 14in (35.5cm) long satinwood, rosewood and line-inlaid chest with silver handle and hinges marked IT, probably for John Troby, London 1799. In fine condition, they were pitched at £3000-400 and also made £7000.

Far Eastern silver made its mark, including a pair of Meiji silver and mixed metal vases bearing the engraved signature Katsuoki koku and gold Katsuoki seal.

Little is known about Katsuoki other than that he appears to have worked under the highly regarded Kyoto craftsman Hata Zoroku III (1882-1944).

However, the quality of the work on the 9½in (24cm) tall vases, finely carved and applied with pheasants among bamboo and pine trees, spoke for itself. With only slight polish wear, the vases quadrupled hopes, selling at £5500.

Unexpected highlights in other areas of the wide-ranging sale included a Hans Coper vase and a piece of early delft among the ceramics, an enamel bonbonniere of Jacobite interest and a sailor’s Valentine. In considerably worse condition, having been broken and restuck, a documentary English delft punch bowl was pitched at £400-600.

Inscribed Edmond Tanner of Northfleat 1715, the 15¾in (40cm) diameter bowl painted with wreathed reserves of vases of flowers and artemisia leaves was relatively large, early and rare, and sold at £2200.

The 2¾in (7cm) diameter French bonbonniere was 19th century but the gouache miniature of Prince Charles Edward Stuart concealed beneath bevelled glass in the inner lid had the usual Stuart charm for bidders.

Equally charming for a romantically inclined collecting base are the shellwork Valentines generally believed to be the work of 19th century lovesick sailors but more probably made in workshops in the West Indies.

The undated, 13½in (34.5cm) wide wood-cased octagonal example at Nottingham depicting hearts centred by flowers had one or two seashells loose but went at 10 times the estimate, to a collector at £2800.