A vase by the great cameo glass artist George Woodall (1850-1925) was offered at auction for the first time at Bonhams’ sale of Fine Glass and British Ceramics last week. 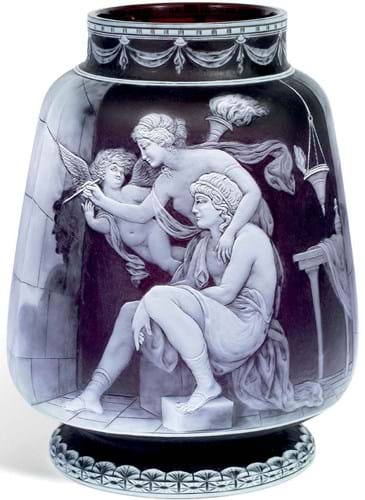 An ‘Origin of Painting’ cameo glass vase by George Woodall that sold for £165,000 at Bonhams.

Origin of Painting, one of three that have all serendipitously appeared on the market in the past decade, sold for £165,000 (£206,000 including buyer’s premium) in Knightsbridge on November 20.

The 9in (23cm) high vase, made when brothers George (1850-1925) and Thomas Woodall (1849-1926) worked for Thomas Webb & Sons in Stourbridge, takes as its subject the tale of two young Corinthian lovers. Fielea is encouraged by Cupid to sketch Ariston’s shadow on the wall, so that she can be forever reminded of her lover’s youthful beauty. The source is most likely a print of a painting by Giovanni Battista Cipriani (1727-85).

George created his first Origin of Painting plaque in 1884 (now in the Corning Museum of Glass). The first of three vases came in 1887. That vase, sold immediately after its completion, was probably the one sold by Woody’s Auctions in Wichita in May 2014 for $260,000 (£162,000). Another commissioned around the same time was the baluster form vase sold by Bonhams in May 2016 for £100,000.

The present vase, signed Geo Woodall to the front and titled underneath, is not listed in the Webb price book but was also probably completed in the late 1880s. Retained by George himself, it unusually features far more hand carving than on other cameo masterworks by him. It is the piece illustrated by Christopher Woodall Perry in The Cameo Glass of Thomas and George Woodall (2000) and for many years was on loan at the Broadfield House Museum. The ‘Origin of Painting vases’ made by the great cameo glass artist George Woodall for Thomas Webb & Sons in Stourbridge in the late 1880s are considered masterpieces of the genre. Remarkably, the example offered by Bonhams was the third of its kind to appear for sale in just five years.

On George’s death, the vase had passed to his second daughter Alice and resided at Luton House, the family home in Kingswinford, until 1954 when it passed to his oldest daughter, Connie. The estimate was £120,000-150,000.

It was joined in the sale by a 6½in (16cm) oval plaque depicting the muse Sappho playing a lyre in an archaic Greek coastal garden – one of George’s favourite subjects. Records show it was originally sold in 1913 for £21 to Clement Harris, a keen cameo glass collector. When sold at Sotheby’s in 1926 it was bought by George’s daughters, Alice and Connie, for £22. Last week it sold at the lower end of a £40,000-60,000 estimate.

Another three-colour plaque titled Aphrodite Rising from the Waves from the same branch of the Woodall family was sold by Fieldings in Stourbridge for £84,000 in January 2018.