A portrait of a mystery sitter by Ambrose McEvoy (1877-1927) sold at auction nearly four years ago led dealer Philip Mould to uncover a forgotten stash of works by the neglected British artist in a lock-up. Now, with his show Divine People: The Art of Ambrose McEvoy, he introduces the artist to a wider audience.

McEvoy was a society portraitist in the ‘Roaring Twenties’, painting sitters such as Winston Churchill and James Ramsay MacDonald. At his death in 1927, he was at the peak of his fame, but his work fell out of fashion as tastes changed after the Second World War.

In early 2015, Mould spotted an auction advertisement for one of McEvoy’s pictures in ATG and researched the sitter, who turned out to be aristocratic British actress and ‘Bright Young Thing’ Lois Sturt (1900-37). Estimated at £700-1000, the picture was hammered down to him at £32,000 (£41,216 including premium and VAT).

Thanks to publicity following the sale, McEvoy’s descendants in North America contacted Mould. They invited him to examine a collection of pictures and sketches by the artist, languishing in a lock-up in Canada, along with an unpublished biography by Eric Akers-Douglas, 3rd Viscount Chilston, in collaboration with McEvoy’s daughter.

The book had been completed in the early 1980s but the only manuscript was lost by publishers (last seen being left with a porter at the Reform Club in St James’s). Following its disappearance Akers-Douglas had to rewrite it and although he finished, he died before it was published.

Mould believes that if the book had been published it would have “put Ambrose McEvoy on the map and he wouldn’t have been forgotten.”

Since the discovery of the book and archive, Mould has been buying the artist’s works and organising Divine People…, the first major show on McEvoy in 50 years. It runs from November 26-January 24 in the dealer’s Pall Mall gallery.

“Art history can lose artists as well as anoint them,” Mould says. “Many of these pictures haven’t been seen in public in 30-40 years. We’ve now managed to bring them to light by working with museums.”

More than 40 works have been lent by institutions such as Liverpool’s Walker Art Gallery and Bradford Museums & Galleries, as well as British private collections. The show is accompanied by the biography, published by Paul Holberton, and a catalogue.

Next spring, Mould will hold a selling exhibition of McEvoy’s works, including 16 drawings priced from £5000-25,000. 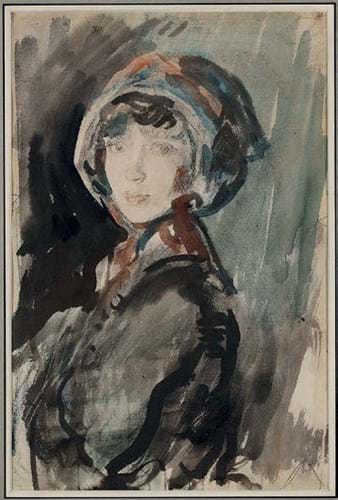 'Portrait of a lady in a bonnet' by Ambrose McEvoy, 22 x 15in (56.5 x 39cm) pen, ink and watercolour, offered in next year’s selling exhibition at Philip Mould's gallery.

Mould adds: “There are opportunities where members of the trade can use their focus and facilities to help treasures get seen. Monetary contributions towards the presentation and transportation of the borrowed works is required but it need not be onerous for the dealer. I believe the trade should be working with curators to find ways for art from their collections to be seen.”

He also credited Art UK, which he used in his research on McEvoy, and says: “Art UK has been invaluable in putting together this exhibition.”

Art UK’s website catalogued the thousands of paintings, works on paper and sculptures which are owned by public institutions. The site enables free digital access to all public artworks via the Art UK site.

Artist happy to chop and change