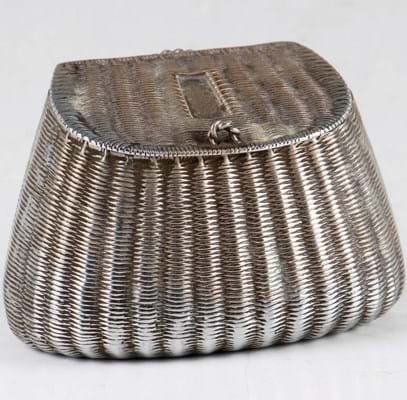 Tucked inside this 18th century treen model of a ship’s hull above is a historic note reading: This was taken out of a writing bureau belonging to Lord Collingwood. I saw the bureau and know its history.

It is a reference to Vice Admiral Cuthbert Collingwood who assumed the role of command-in-chief after Nelson’s death at Trafalgar. The 5½in (14cm) carving carries an estimate of £300-500 at Special Auction Services in Newbury on November 5.

The estimate is £80-120 at David Duggleby in Scarborough on November 8.

The sale of Antique and Modern Fishing tackle at Mullock’s of Church Stretton, Shropshire, on November 1-2 includes a novelty Victorian electroplated vesta case modelled as a fishing creel vesta.

After his first visit to Cumae in 1956, the earliest Greek colony in Italy, Michael Ayrton (1921-75) wrote and created many works associated with the myth of the Minotaur.

In the Greek myth, the Minotaur is a monstrous creation of man and beast: to Ayrton he was a more thought-provoking creature.

A number of Minotaur works by him, both on paper and in bronze, are included in the sale conducted by Modern Art Auctions in Scarborough on November 6.

modernartauctions.co.uk or see this item on thesaleroom.com