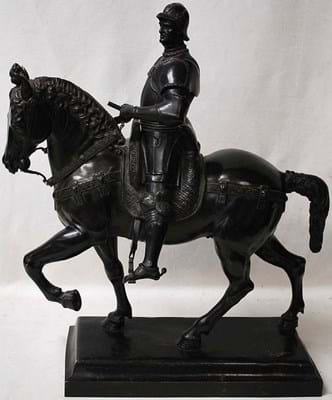 The large 2ft 1in (63cm) high black patinated figure with metal fabric reins comes with an estimate of £500-1000 in an auction of Antiques and Fine Art on June 12.

An early letter written by Winston Churchill (1874-1965) during his brief ‘defection’ from the Conservatives to the Liberal opposition will be offered for sale at Berkshire saleroom Dawson’s in Maidenhead on June 22.

The letter – dated January 15, 1906, on ‘Colonial Office, Downing Street’ headed paper – was hand-written to Rev William Turner, a local supporter of the Liberal movement in Manchester.

Churchill’s successful election as Liberal MP for Manchester North West came nearly two years after he had ‘crossed the floor’ of the House of Commons following his opposition to the government’s Alien Bill, which he viewed as a thinly disguised effort at anti-Semitic and anti-immigrant electioneering by the Conservative British government.

The letter has passed by descent in the Turner family and will be offered for sale with a £1000-1500 estimate.

Modern and antique gun specialist Holts will hold its next sale on June 18, the second to take place at its new central London venue in Kensington. The auction contains a range of modern sporting guns as well as collectable vintage and antique arms, accessories and militaria.

A highlight is a 2ft 10in (89cm) long English Cromwellian mortuary sword with a straight single-edged spear-point blade dating to c.1670. It also has an iron basket hilt and is carved with naïve foliage and human masks.

More than 58ft long, this hand-coloured leporello or concertina above captures the pomp and pageantry of the procession marking the coronation of Queen Victoria. In the age before photos, this souvenir reproduced the entirety of the affair (or something close to it) and served as a template for later such occasions.

Priced at £1 11s. 6d, it was published by sporting prints specialist Fores under the appropriately lengthy title of Correct Representation of The State Procession on the Occasion of the August Ceremony of her Majesty’s Coronation, June 28th, 1838. It is being offered for sale at London book dealership Maggs for £1500.