Auction firms in France have been releasing their ‘Bilans’ or sales figures for the first half of 2019. 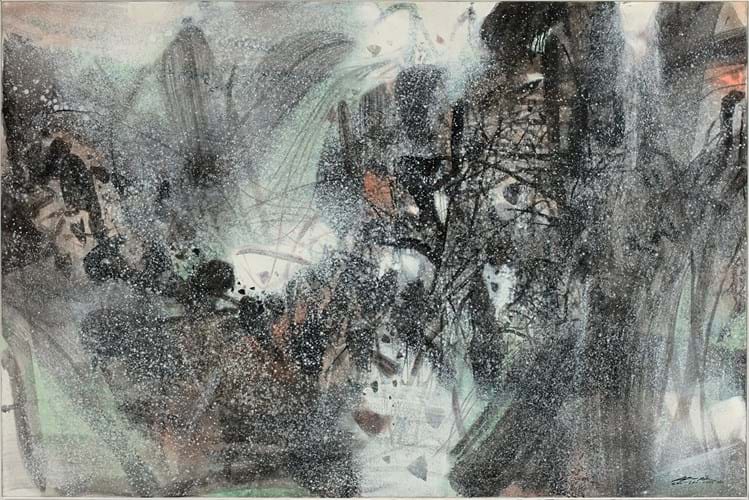 This oil on canvas by Chu Teh-Chun from 1988, ‘Synthèse Invernale C’, made the highest price for a Contemporary artwork at auction in Paris so far this year when it sold for €5.2m (£4.66m) at Artcurial in June. Image copyright: Artcurial.

Artcurial has announced total sales of €123m (£111m) for the half-year (a figure that includes sales in Paris, Toulouse and Monaco in January, buyer’s premium and VAT but not private or aftersales), a 4% increase on the results for the equivalent first half of 2018.

The firm’s deputy chairman François Tajan says this growth is partially due to the success of the Contemporary art department – up 39% – and the group’s Artcurial Motorcars with a 37% rise. These two market sectors also produced Artcurial’s highest individual prices: €5.2m (£4.66m) paid in the June Contemporary sale for Synthèse Invernale C, a painting by Chu Teh-Chun from 1988, and €16.74m (£15m) for an Alfa Romeo touring Berlinetta from 1939 sold at Rétromobile in February.

Sotheby’s Paris also posted a sales figure of €123m (£111m) for the first half of the year (its figure includes buyer’s premium, and aftersales minus VAT but not private sales). The €11.5m sale of African Art from the collection of Marceau Rivière at Sotheby’s in June was topped by this Baule mask which realised €4.72m (£4.25m). Image: Sotheby’s/ArtDigital Studio.

Christie’s Paris realised sales of around €84m/£76m (this figure includes buyer’s premium and aftersales but not private sales). Contemporary and Modern art was also its strongest suit with seven of Christie’s 10 top prices in this category from its sale on June 4, led at €2.89m (£2.6m) by a Nicolas de Stael Paysage de Vaucluse No 3.

The Drouot auction centre, which is home to 62 auction firms, chalked up €201m (£181m) for the 569 sales held on its Richelieu and Montmartre premises during the first half of the year (this figure includes premiums but not after or private sales). The six lots that surpassed the €1m mark comprised three Old Masters, two Asian works of art and one Impressionist painting.

Ambrosius Bosschaert the Elder’s floral still-life sold in June by Frayes & Associés with Binoche et Giquello led the list on €3.3m (£2.98m), followed by a €2.56m (£2.3m) bronze figure of Buddha from the Kingdom of Dali dating from the 12th-13th century sold by Delon-Hoebanx on June 13. All results for individual items include buyer’s premium.