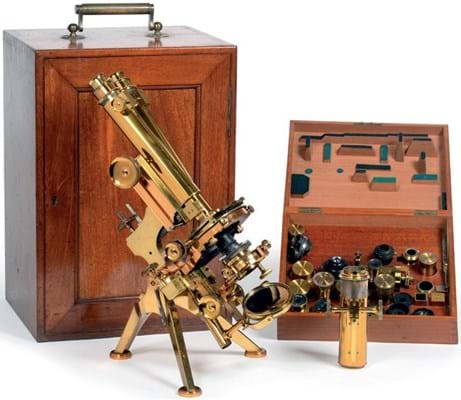 Only 500 of these combination clock barometers by E Bourdon & Richard were ever produced. This example is priced at £3400 from Carlton Clocks in Buckinghamshire.

Bourdon patented this type of barometer gauge in 1849, with this 10in (26cm) high ship’s style combined clock metallic example dating to the 1860s. The eight-day spring driven clock movement is signed Richard a Paris with silvered lever platform escapement and the back plate struck with serial number 80.

Attributed to the Victorian medallist and sculptor Joseph Edgar Boehm (1834-90), this cast bronzed figure group will be offered in a two-day sale on February 4-5 at Cumbria saleroom 1818 Auctioneers.

A prolific Royal Academician, Boehm designed the ‘jubilee head’ of Queen Victoria on coinage and created the statue of the Duke of Wellington at Hyde Park Corner.

This Van Heurck binocular microscope (no 5414) by W Watson & Sons is included in a sale of cameras, scientific and musical instruments at North Yorkshire saleroom Tennants on January 30 in Leyburn. Formerly in the collection of TV wildlife expert David Bellamy – dispersed at Tennants in 2014 – it is guided at £3500-4000.

The instrument dates to c.1890 and is regarded as Watson’s finest model of a brass compound microscope. It stands on a shaped tripod base with a mechanical stage and comes with an original fitted mahogany case and a selection of accessories.

Discovered under a sheet in an outbuilding on a country estate, this Louis XVI-style centre table by Alfred Emmanuel-Louis Beurdeley (1847-1919) will be offered by the Winchester salerooms of Andrew Smith & Son on February 5.

The ormolu-mounted and brass inlaid mahogany table, stamped twice to the underside A BEURDELEY, is an early piece by the French maker dating to c.1870.

The desk was originally housed in the library at The Grange in Northington, Hampshire, the seat of the Ashburton family, and is depicted in a photograph of the library dated 1871.